A stage of good length and without major differences in height along the Cammino del Salento.

The highlights of the day are the beautiful village of Castro, with the Aragonese castle, and the small port center of Tricase Porto.

We follow the orange signs of the Cammino del Salento.

The only water point is in Castro.

We leave Santa Cesarea Terme and, along the road, we skirt the coast until we overlook the cove of Porto Miggiano. Shortly after, we overcome the provincial road and continue slightly uphill until we reach Chiusura Sterna, from which we take the path on the left, towards the south; after about 1 km, we enter the town of Castro - the Aragonese castle with its beautiful museum is worth a visit).

Along the walls of the castle, we go down towards the sea and, from Punta Correnti, we follow the coast on a thin path between the rocks. Thus, we arrive in the fantastic cove of Acquaviva, the ideal place to enjoy a swim. After a short climb through the Acquaviva wood, we return to asphalt and walk there for a few hundred meters, before turning to the left on an uphill path, short but very steep.

From here on, our path becomes more rural and we proceed between the asphalt sections and parts of the path through the suggestive stone pagliari, for several km (during which we overcome an asphalted road). The path proceeds gently, surrounded by the millenary olive trees. Finally, with a short descent, we arrive at Tricase Porto and, continuing southwards in ups and downs, we reach Marina Serra.

The nearby town of Castro was the place where Virgil set Aeneas’ disembarkation.

For a long time, it was believed that the majestic temple dedicated to Minerva, described in the Aeneid, was located in the locality of Porto Badisco; but the recent discovery of a female statue confirms that the temple was actually located in Castro. Once again Salento proves to be a real melting pot of people, cultures, and stories of the Mediterranean Sea.

Salento is particularly known for the musical tradition of pizzica, which many authors have linked to the healing rite of the tarantati.

In the past, it was believed that those who were stung by a spider or other poisonous animals, or those who were caught by forms of hysteria or madness, could be cured through music and dance. The dance, which had the function of exorcising physical and spiritual evil, could go on uninterrupted for days. The first to study the phenomenon in depth was Ernesto De Martino, in the 1950s: in the work La terra del Rimorso he explored the use of healing psychophysical illnesses through the induction of the trance state given by the exhausting dance. The main instrument of the pizzica, dance music that is part of the traditional tarantella, is the tambourine.

On the coast between Otranto and Santa Maria di Leuca, there is the Parco Naturale Regionale Otranto-Santa Maria di Leuca e Bosco di Tricase, a protected area established in 2006. The park overlooking the sea aims to preserve the natural environments characterized by the Mediterranean scrub and caves inhabited since prehistoric times.

There are numerous defensive buildings in the area of Tricase; the most important is Palazzo Gallone built in 1661 on the remains of a 14th-century castle destroyed by the Turkish attack.

Two other castles are present in the municipality of Tricase: that of Tutino, which still retains the original moat, and that of Caprarica, built after the battle of Otranto in 1480.

Outside the center of Tricase, in the Sant'Eufemia district, there is the Crypt of the Madonna del Gonfalone, a rock church probably founded by the Basilian monks who fled the iconoclastic war of the Byzantine emperor Leo III The Isaurian.

Obtained from a rocky bank of tuff between the 9th and 11th centuries, it was a sacred place as well as ... safe. The crypt, supported by 19 octagonal columns, has numerous frescoes on its walls and a Baroque altar.

For a quick and tasty meal, we suggest you try the stuffed puccia, a kind of sandwich made with pizza dough, with a round shape of about 20-30 cm in diameter.

Tradition has it that the puccia was invented by Giovanni Caccetta, who put crushed balls of bread dough in the oven; a soft and empty sandwich came out, ready to be stuffed.

Traditionally, pucce are eaten on the day of the Immaculate Conception; there are no particular traditional fillings, each area has its own specialties. In the Apulian pizzerias it is easy to find a smaller version, called stuffed uliata with olives in brine - watch out for the stones!

Starting point reachable by bus from the city of Lecce, with a change in Maglie. 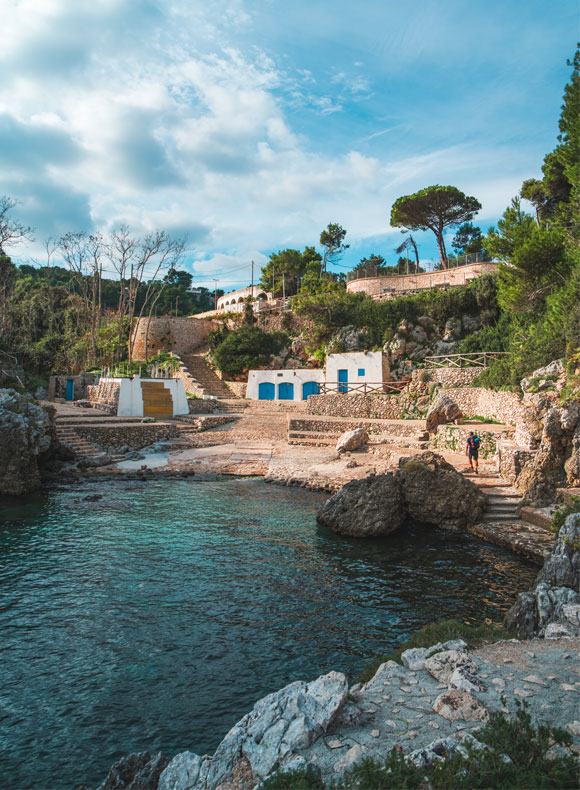 “The Cammino del Salento is a succession of inviting coves, the water is emerald green” 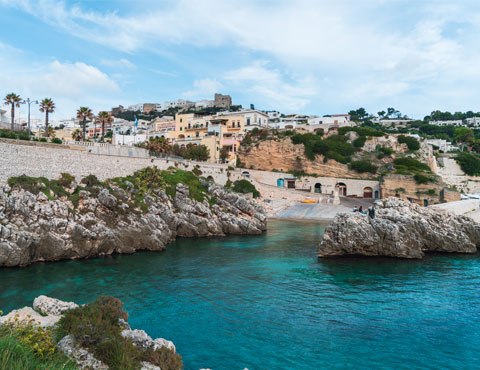