A stage of good length and gradients, quite strenuous but full of beauty, all within the Madonie Park.

The Santuario della Madonna dell'Alto offers us a limitless panorama.Some sections of the route, in the climb to the Sanctuary and especially in Vallone Faguara, are difficult to see due to the invasive vegetation, so you will have to proceed by eye; it is good to follow the GPS track.

Possible presence of vipers in the tall grass: hit the ground to signal your presence.

Some sections of the route, in the climb to the Sanctuary and especially in Vallone Faguara, are difficult to see due to the invasive vegetation, so you will have to proceed by eye; it is good to follow the GPS track.

Possible presence of vipers in the tall grass: hit the ground to signal your presence.

We leave Petralia Sottana and go by road to the hospital. From there we take the old royal road, which is not asphalted, and start our long climb (about 850 m height difference) towards Monte Alto. After an almost flat first section, we cross an old Roman bridge and start climbing more steeply until we reach a dirt road at the foot of the beautiful falesia del Pizzo di Sant'Otiero. We turn left and go up and down halfway, first passing some large ponds, then a large kennel; shortly afterwards we take the path to the right and climb again.

The path is not always easy to see and you have to be careful to recognise the path on the ground; the gradient increases. The last part of the climb is in hairpin bends over the scree, then we come to a forest road, turn left, pass a fountain on the right and climb up the last gentle slope to the Santuario della Madonna dell'Alto (1,819 m), ideal for a lunch break thanks to the incredible view.

Back at the fountain, we turn left and continue walking uphill and downhill on the forest road until we reach Piano Iola; from there we turn right and descend (about 300 m) to the provincial road. The path, which is wide and comfortable at first, gradually becomes a steep path with a slippery surface; be careful here. When we reach the road, we cross it and continue our descent (about 100 m drop) until we reach the bottom of the valley, with the stream directly below us. The section halfway up the slope is challenging, as there is no clear track on the ground: You have to use your eyesight, sharpen your vision to spot the markings (if any) and rely on your intuition. Finally, skirting the stream, we reach a large forestry hut, from where we take the road and begin the climb (about 200 m height difference) towards Piano Battaglia. Then, near a hairpin bend, we leave the road and take a small path on the opposite side of the small valley (the path is practically non-existent for the first few metres). At a steady pace, we finally reach Piano Battaglia, a place of absolute beauty at the foot of Pizzo Carbonara (1,979 m), the second highest mountain in Sicily.

The Piano Battaglia plateau is a large polje - a karstic depression surrounded by a rocky crown - and is part of the Pizzo Carbonara karst complex (1979 metres).

It is located in the municipality of Petralia Sottana and is a well-known ski resort (the only one in western Sicily) and winter sports resort. In the second half of the last century, numerous alpine-style huts were built around the Rifugio Marini and the facilities on the Mufara, which became the mountain retreat of the Palermo bourgeoisie.

The origin of the name Piano Battaglia is disputed: some claim that it is linked to a competition between local woodcutters, while others attribute the name to a battle that took place here between the Normans and the Saracens.

The valley where Petralia Sottana and Soprana are located is overlooked by the Santuario Madonna dall'Alto.

Located at an altitude of 1,819 metres on the summit of Monte Alto, it consists of a church and a dormitory where pilgrims can spend the night in summer. The structure, probably built in the 13th century, is linked to the legend of the discovery of the marble statue of the Virgin near the Tower of Roccella, washed ashore after a shipwreck. The statue was on an ox cart that was wandering aimlessly: the legend, like many others throughout Italy, says that the two oxen stopped right here on the mountain, so that the inhabitants of Petralia and Polizzi joined forces to build the shrine. The marble statue inside the sanctuary is attributed to the sculptor Domenico Gagini and is dated 1471. On 14 August, there is a nightly torchlight procession following a feast day attended by numerous pilgrims.

Among the numerous karst formations around Piano Battaglia is the inghiottitoio della Battaglietta (Battaglietta Swallowhole), a small cave at the foot of the northern slope of Monte Spina Puci.

The cave is about 100 metres long and 30 metres deep. Due to the clayey soil, the cave is today accessible only to experienced cavers. Not far away is a bioherma (a kind of hill formed by the emergence of the coral reef) where numerous fossils can be admired.

Among the evocative villages of the Madonie, Castelbuono is certainly one of the most beautiful.

The town’s landmark is the castle, built in 1317 at the behest of Francesco I Ventimiglia, with its classic quadrangular keep shape; the structure has been influenced by numerous Sicilian dominions: Arab, Norman and Swabian.

Inside the castle is the Palatine Chapel, completely covered with stuccoes by the brothers Giuseppe and Giacomo Serpotta. The chapel is decorated with two precious paintings: the Discesa di Cristo (Descent of Christ), a copy of a work by Rubens, and the Estasi di San Liborio (Ecstasy of Saint Liborio) - both created in the 19th century by the painter Mariano Galbo.

A typical agricultural product of Polizzi Generosa are the Pipiddi, a variety of small peppers with an intense green colour.

The peculiarity of this vegetable is that the berry, instead of leaning towards the ground, grows upwards. It is protected by the Slow Food Praesidia and has always been part of peasant life in Polizzi: the typical lunch of the pickers consisted of bread, sheep's cheese and pipiddi. They are eaten raw or grilled, dressed with oil, basil and wine vinegar.

Another traditional product of Polizzana agriculture are the Badda Beans, a type of legume characterised by its purple-white colour and round shape (badda means “ball” in the local dialect). A niche product that is also protected by the Slow Food Praesidium.

The taste is characterised by a spicy and slightly tart flavour. At the end of the year, a feast is dedicated to this bean. It can be enjoyed with tagliatelle and Picchi Pacchio (fresh tomatoes) or in a soup with wild fennel and pork rind.

A traditional product of the Castelbuono and Pollina communities is Manna - namesake of the biblical food (which probably has a very different origin) that saved the Hebrew people during their journey through the desert. It is the sap of a certain type of ash tree (Fraxinus angustifolia). The carvings are made in summer, when the soil is poor in water and the sap begins to flow down from the crown to the roots.

In the distant past, Manna was used without knowing its properties. It was not until the 19th century that its production increased due to demand from the confectionery and pharmaceutical industries - as well as for the production of liqueurs. Among the pharmaceutical properties of manna is its laxative effect, which is excellent for gastrointestinal problems.

Manna is nowadays cultivated by nylon threads on which the resin drips and forms long cannoli. The price of Manna is around 200 euros per kilo: it was a real godsend for this region, as its production, which only took up a limited period of time in the agricultural season, provided additional income for the farmers - thanks to which many families could afford to send their children to school.

The starting point can be reached by bus, starting from the city of Palermo. 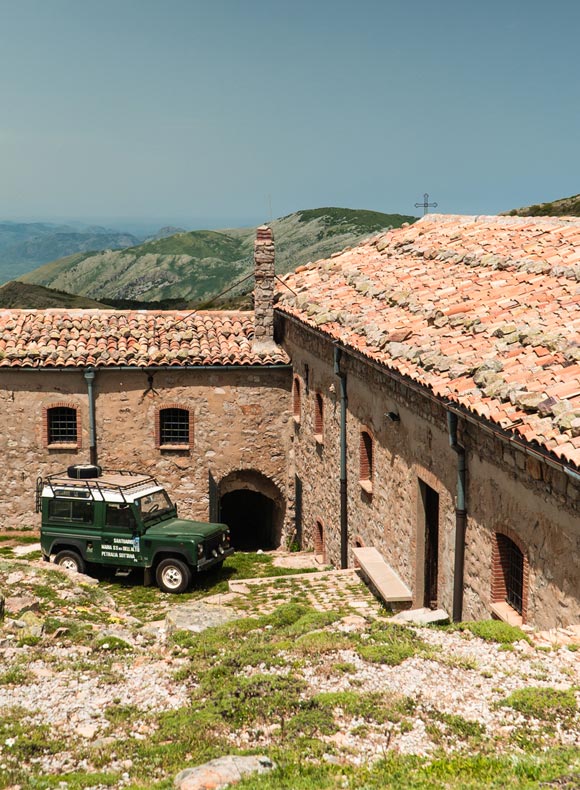 “On a sultry day we are not the only ones who seek cooling in the sanctuary: and so we toast with the foresters” 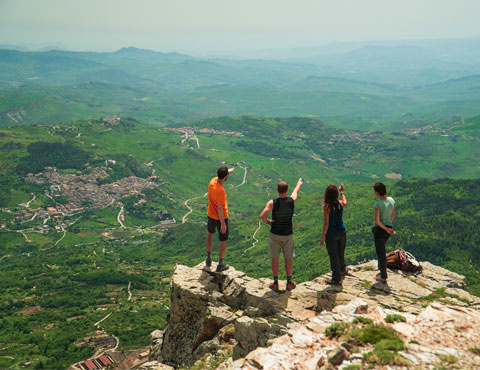