A short stage with quite a difference in altitude within the Parco delle Madonie.

We walk through an agricultural landscape, with Mount Etna always clearly visible behind us, and reach the beautiful village of Petralia Sottana (...not to be confused with Petralia Soprana!).

You come across some barbed wire gates that you have to open (and close again, always!).

We leave Villa Rainò and return to the junction with Sentiero Italia, on an asphalt road. Then, leaving the asphalt road, we take a dirt track and begin a long, gentle climb (about 600 m height difference). When we come to an asphalt road, we follow it to the left for a couple of kilometres, then at a crossroads with a fountain, we take a dirt road that shortly afterwards becomes semi-flat and begins to descend (about 500 m drop), at first almost imperceptibly, with a beautiful view of Petralia Soprana. When we reach an asphalt road, we follow it slightly to the left, then near some small lakes we take the dirt road again to the right and descend to the centre of Petralia Sottana.

The Madonie are a mountain range of the Sicilian Apennines (the most ancient) within the park of the same name, extending from the mountains to the coastal strip and bounded on the east by the valley of the river Pollina and on the west by the northern Imera valley. The park is made up of clay hills and is characterised by its deep valleys and cliffs overlooking the sea.

The mountain massif of the Madonie contains the most imposing peaks in Sicily (with the exception of Mount Etna), including Pizzo Carbonara, which is the highest peak at 1,979 metres. The Madonie are characterised by a karst landscape - especially the Carbonara complex, where there are numerous sinkholes, caves and dolines.

The park, which was designated a UNESCO Global Geopark in 2015, is home to numerous rare animal and plant species, including the Madonie fir (also known as the Nebrodi fir) or the Cupani broom and the Astragalus. Animals found in the park include the fallow deer, which was reintroduced in the 1980s.

The Nebrodi or Madonie fir is a plant of the Pinaceae family endemic to Sicily. The plant, a subspecies of the silver fir, is threatened with extinction and represents a living fossil: it is in fact a species that survived the last ice age - its forests are reminiscent of those in northern Europe.

At the beginning of the 20th century it was considered extinct, but was rediscovered in 1957 in the Vallone Madonna degli Angeli in the municipality of Polizzi Generosa: since then the trunks have been cultivated in nurseries and then transplanted to the Madonie mountains. In the local vernacular it is also called arvulu cruci cruci (“cross cross tree”) because of the shape of its branches.

The Madonie are mountains known for the extraction of gypsum, a rock that is common throughout the area and was one of the main economic bases for the local population.

The crushing of the mineral was done in mills powered by the waters of the river Imera. In particular, Cozzo Cufino, where the Vecchiuzzo cave is located, was the most important place for the extraction of chalk.

Traditional in Petralia is the ballo della Cordella (Cordella dance): an ancient peasant dance that became part of pre-Christian traditions such as the Sagra della spina di Ganci.

The dance is performed by twelve couples representing the months of the year, dancing around a pole decorated with ears of corn and colourful ribbons. The ritual, a symbol of rural fertility, is also a good omen for young newlyweds. The leader of the group, the Bastoniere, dictates the rhythm of the figures’ representations of the four seasons and agricultural work.

Together with Turin and Milan, Petralia Sottana was one of the first cities in Italy to have electricity in 1908.

The hydroelectric power station built on the banks of the river Imera was in operation until 1972, when it was damaged by a flood. The Catarratti hydroelectric plant was an important milestone in the city's development in the 20th century.

The streets of Petralia Sottana served as a backdrop for the film Le stelle non hanno padrone (The stars have no masters) by director Salvatore Bongiorno.

The film recounts the events of the peasant movement that organised itself into trade unions after the World War II to enforce the Gullo laws. An important role was played by the students of the Magistral Institute, who supported the workers in their struggles and brought the different social classes of the country closer together.

In Petralia Sottana stands the narrowest house in the world, called casa du currivu or “house of wickedness”: It is only 100 centimetres wide.

Built in the 1950s, it is uninhabitable and was meant to block the view of the house in front of it (the façade was even painted black): It was built out of spite (hence the name) after a dispute between neighbouring relatives.

The main church of Petralia Sottana is the Basilica di Maria Santissima Assunta. Located in Piazza Umberto I, from which there is a spectacular view, it is characterised by Baroque forms built in the 17th century, including the façade enriched by a monumental arched portal covered with marble cornices.

The basilica was built over an ancient church built by the Normans, but some say it was a mosque in Arab times. Inside is a Santo Romano pipe organ from 1659, the oldest in the Madonie region.

The basilica houses an enormous treasure trove (mediaeval, baroque and neoclassical goldsmith’s work, as well as vestments and sacred furniture) and a valuable old archive.

In addition to the various events to entertain the public, there are numerous gastronomic stands: from cold meats to liqueurs, from cheeses to preserves, from honey to legumes.

The Guastedda or fried Vastedda is a sweet or savoury pancake that originated in the nearby town of Gratteri. It is a doughnut made of flour, water and yeast, very similar to the Emilian gnocco fritto.

Traditionally it is served in the savoury version with an anchovy in the middle, and in the sweet version sprinkled with sugar. There is also a fashionable version topped with cheese and eggs.

A traditional Indonesian dessert is the sfoglio, called 'u Sfuagghiu by the locals.

It is a variation on the classic baked cassata, filled with tuma (Sicilian cream cheese), cinnamon, chocolate and a generous amount of sugar - some add candied pumpkin. It was invented by the Benedictine nuns of the monastery of Santa Margherita di Polizzi Generosa in the 17th century as a dedication to Saint Benedict.

The nearest location that can be reached by bus is Gangi, starting from the city of Palermo.

Here is the  LINK to check the timetables. 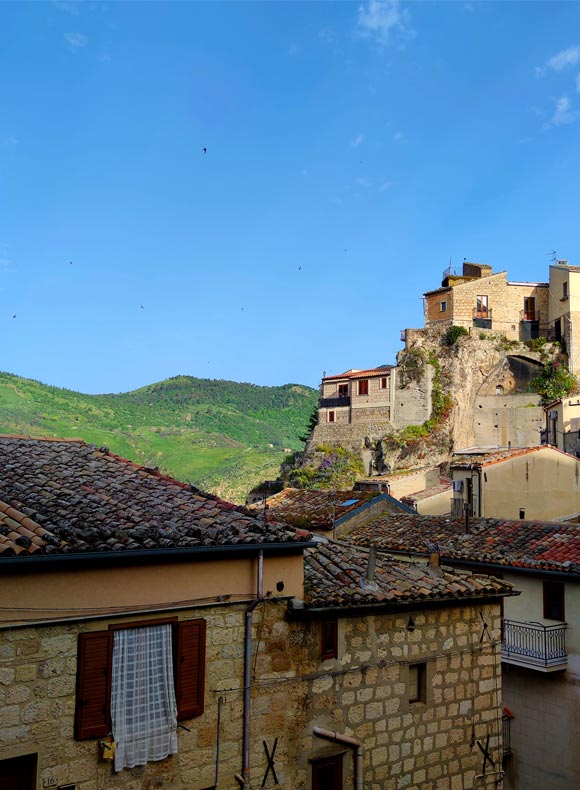 “In the narrow streets of Petralia we enjoy local specialities” 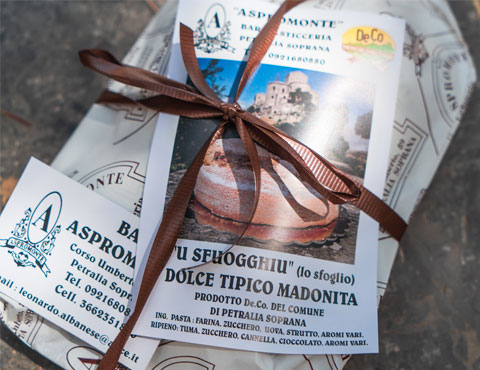