A fairly short but not uneven stage in the typical forest landscape of the Aspromonte, along the Sentiero del Brigante.

This stage represents a variant of the Sentiero Italia (which heads south and reaches the village of San Luca), which is preferred here for logistical reasons.

The signage of the Sentiero del Brigante are marked “SB”, so look out for them at the crossroads.

We leave the Piani di Zervò and return to the wood along a wide path, passing a beautiful grassy clearing. We continue, crossing a small stream and crossing some ferny plains; we come to an asphalted road that we follow to the right for a few hundred metres; then we take a path to the left that climbs with a fairly steady gradient (about 200 m height difference) to Passo di Cerasara (1,399 m), where we again cross an asphalted road.

At the end of the climb, we face a descent (about 200 m drop), which is very steep at the beginning and has no real path; we then cross over onto a dirt forest road and continue without difficulty to Piani di Carmelia, from where we reach the Rifugio Biancospino after the last 2 km on a tarmac road (and some cuts through the ferns).

A native of San Luca is the writer, journalist, poet and screenwriter Corrado Alvaro.

He began his career as a poet very young and later became a contributor to several national newspapers. During the Fascist period, he was one of the signatories of Benedetto Croce’s “Manifesto degli intellettuali antifascisti” (Manifesto of Anti-Fascist Intellectuals), but was later reproached for having published a reportage on the Agro Pontino for the Fascist Institute of Culture.

Among his works is the tragedy Lunga notte di Medea, published in 1949, in which the writer reinterprets the clash between Jason and Medea as an opposition between a heroic gesture and a man weary of heroism. Winner of the Strega prize in 1951 with Quasi una vita, Alvaro died in Rome in 1956.

The Parco Nazionale dell'Aspromonte was established in 1994 and covers 37 municipalities with a total area of 76,000 hectares.

The Aspromonte Massif is largely made up of granite rocks, which are different from the typical rocks of the Apennines: this is another reason why the Aspromonte, together with Serre and Sila, is thought to have originated in the Alpine chain.

The wild land, which stretches near two seas and has several plateaus in its interior, rises rapidly from the coast; during periods of heavy rainfall, the Fiumare, powerful watercourses that not only pose a serious threat to the area but also produce extraordinary waterfalls, originate here.

Untouched nature prevails within the park, characterised by a rich fauna and unique flora thanks to the exceptional climatic conditions: the white fir forests are a real rarity and the surroundings are rich in biodiversity: larch pines, black poplars, goat willows, black alders...

Since 2001, the Aspromonte National Park has been part of the UNESCO World Network of Geoparks.

In the municipality of San Luca is the Santuario della Madonna dei Polsi (also known as Madonna della Montagna).

It was probably founded by Byzantine monks around the 9th century AD, but legend has it that a shepherd found his donkey while digging up a Greek cross. On the same spot where the animal was found, the Virgin Mary appeared to him with the Child and asked him to build a shrine in her honour.

Located at an altitude of 862 m, numerous pilgrimages and festivities take place there between August and September.

A typical Calabrian Easter sweet for Locride is the sguta: a small doughnut with an egg in the middle. It is baked in the oven and is a symbol of the end of Lent. The shape of the doughnut varies according to fantasy and tradition.

At Christmas time, on the other hand, nacatole are prepared. This is a twisted dough that is deep-fried and then eaten together with a liqueur wine.

The nearest location that can be reached by bus is Santa Cristina d’Aspromonte, starting from the city of Reggio Calabria. 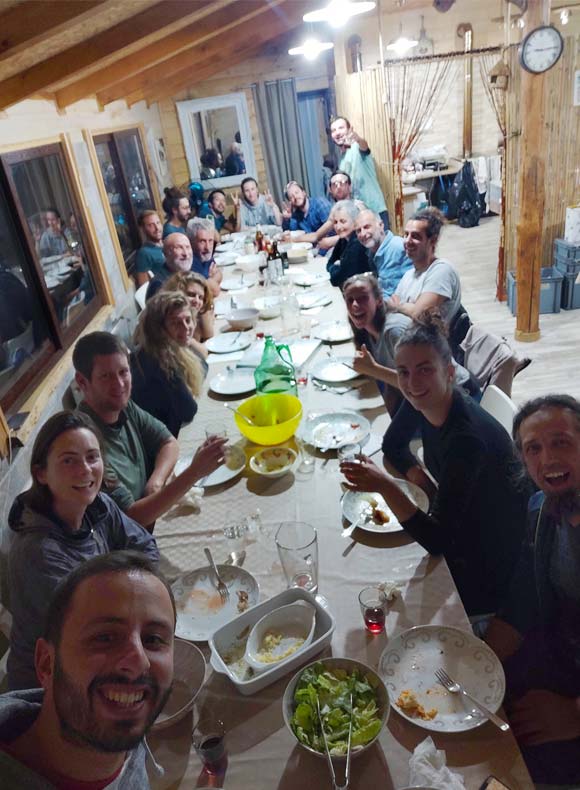 “The reception at the Biancospino hut is extraordinary: in the evening the table is crowded and we guzzle with all the rage” 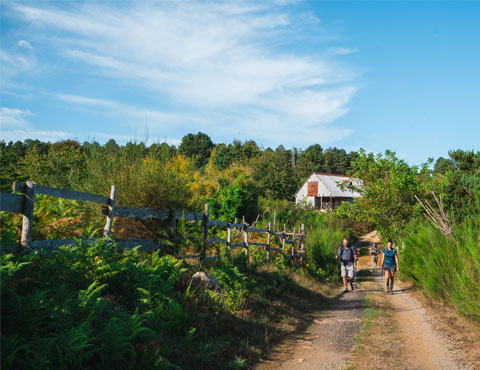