Quite a long stage, most of which you spend in a beautiful beech forest. From the hills, you can see Vesuvius in the distance (sky permitting).

The arrival at the sanctuary is magical.

For the first 2 - 3 km, despite the existing signs, the path is non-existent, but buried under brambles and ferns.

After that, the stage does not present any particular difficulty, but it is necessary to pay attention and check the GPS track often, as there are several paths in the beech wood (all marked with white and red signs) and it is therefore easy to get it wrong.

We leave the picnic area of Piano di Prata, walk for about 200 m on an asphalt and dirt road and then take the actual path that begins the climb (about 300 m height difference). We have to make our way through brambles and bracken for a few kilometres: the signposts are there (though obscured by vegetation), but the path is non-existent.

Eventually, we reach the wood where the path is practicable again. We climb a little further and emerge from the wood, where we meet a provincial road that leads to the right, and shortly afterwards, we turn left onto an asphalt road to take a dirt track. We continue on a slight slope and the path becomes pleasant. After returning to a beechwood, we soon come across the ruins of the Casina Reale, an impressive building. We continue uphill and downhill until we cross a plain and then briefly re-enter the beechwood and arrive at Piano Melanio, where it is easy to come across grazing cattle (horses and cows): the place is ideal for a break thanks to the picnic area.

We enter the beechwood again until, after a few climbs, we reach the Quattro Vie clearing (at the foot of Monte Taburno), where several paths cross - be sure to take the one on the right, which goes slightly downhill.

After a few hundred metres, we leave the forest and admire Vesuvius in the distance as we walk along the hillside. Finally, we return to the shade of the beech trees and, after a last short uphill climb, we face the rather steep descent (about 600 m drop), which zigzags, sometimes on a path, sometimes on a gravel road.

We turn right, and after the last stretch of path, which is quite level ground, we enjoy the beautiful arrival at the back of the sanctuary.

The stage ends at the Sanctuary SS Maria del Taburno, located on the mountain's slopes of the same name at an altitude of 544 metres.

Like many other sanctuaries, this one was founded, according to legend, after an apparition of the Virgin Mary to a shepherdess, whose name was Agnese Pepe, in 1401. While she was leading her sheep to the pasture, she heard a call from a cave where the statue of the Virgin and Child appeared. Although the girl was mute, she reported the event to her father who, to his astonishment, went to the place of the apparition together with other villagers. They went all together to the Duke of Airola and asked for the construction of a shrine that corresponded to the Virgin's wishes. Since then, many pilgrims have paid homage to the statue, especially sick people seeking miraculous healing.

Over the centuries, the Sanctuary, which housed several monastic orders, went through changing phases: there were also attempts to abandon the Sanctuary (to rebuild it further down the valley), but "miraculous" interventions prevented this each time. By the end of the 18th-century, there were no more monks in the monastery, but the ruler stipulated that the monks guaranteed the constant presence of a lay guardian to receive pilgrims, celebrate daily mass and look after the Sunday in albis (Sunday after Easter), the day when the local population traditionally went up to the holy place. The contemporary history of the Sanctuary is marked by its neglect after the 1980 Irpinia earthquake, which was followed by theft and devastation.

Today, the place is alive again and it is possible to visit the church decorated with precious frescoes.

At the Fizzo Springs on Monte Taburno begins one of the most magnificent structures of the 18th-century: the Carolino aqueduct.

It was commissioned by Carlo di Borbone to supply the city of Caserta and in particular the royal palace and its gardens. In 1997 it was inscribed on the Unesco World Heritage List. The best minds of the Kingdom of Naples, including Luigi Vanvitelli, the famous architect of the Royal Palace of Caserta, worked on the project. The work consists of a 38-kilometre tunnel, most of which is underground.

The bridges are impressive, especially the Valle di Maddaloni bridge, a gigantic structure (about 60 metres high and 550 metres long) inspired by Roman aqueducts. It consists of three rows of arches and was the longest bridge in Europe when it was built. Its engineering greatness is also proven by the fact that it has withstood the earthquakes that have devastated the region in recent centuries without affecting the aqueduct and its bridges.

The Sanctuary of the SS Maria al Taburno is located in the municipality of Bucciano, famous for a song by Napoli Centrale.

In the song 'A gente 'e Bucciano, the jazz-rock group led by James Senese narrates the drama of the emigration of the local population to northern Italy, highlighting the critical aspects of a false myth of progress.

Not far from the Sanctuary is the Grotta di San Simeone, which dates from the Middle Ages and houses a large fresco of the saint. It was painted in 1601 and is in excellent condition.

Saint Simeon the bishop is the protector of travellers, keeping them safe from bad weather - the left hand of the figure shows the inscription Ecce iam serenat: "it is now clear".

Downstream, not far from the municipality of Bucciano, you can visit the beautiful village of Sant'Agata dei Goti - also known as "the pearl of Sannio".

People are particularly impressed by the houses built on the tuff wall. The origins of the village date back to Samnite times: not far away was the town of Saticula, which later became a Roman colony. Another curiosity concerns the name, which has nothing to do with the population of the Goths: the place name goes back to the feudal lords of this area, the Drengot, and was transformed over time into the present name.

A typical product of the region is the Melannurca, a variety of apple that is considered the “queen of apples” because of its qualities (juicy, crunchy and very fragrant).

The typical red colour, speckled with white, is produced after the reddening phase: the fruits, picked while still unripe, are placed in strips of ground covered with straw (called “melai” or “porche”) and left to ripen until they reach their typical colour. During the ripening process, the apples are turned by hand one by one; perhaps because of its expensive processing, the Melannurca has been displaced by other varieties.

Today, its restoration is the basis for many local initiatives.

The 'nfrennule are a variety of salted taralli in the shape of figure eight, typical of the Benevento area.

The name derives from “frenulum”, a kind of mediaeval bridle of Norman origin. The feudal lords used to celebrate the signing of pacts with ‘nfrennule and wine.

Santuario Maria SS al Taburno, just above Bucciano (hospitality must be requested from the parish).

The nearest location that can be reached by bus is Frasso Telesino, starting from the city of Benevento.

Here is the LINK to check the timetables 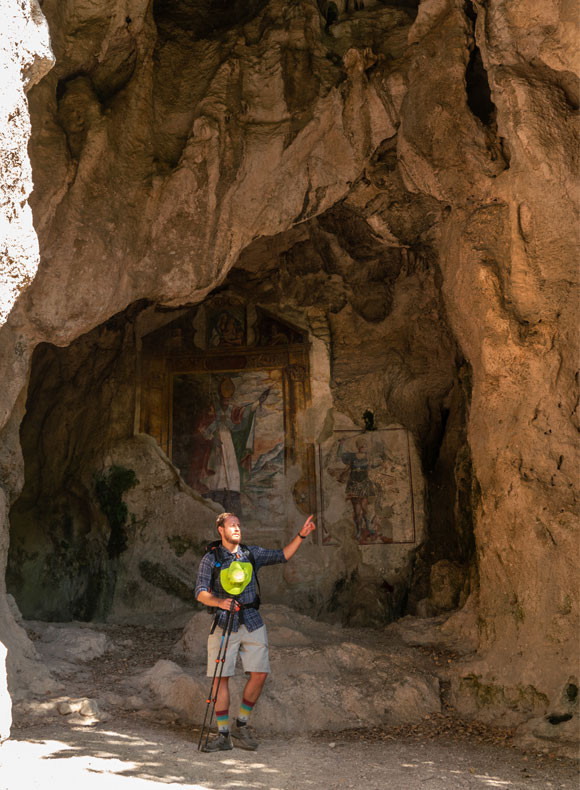 "The heat of July oppresses us, and we seek shelter in the grotto of St. Simeon, who seems to invite us with uplifted hand" 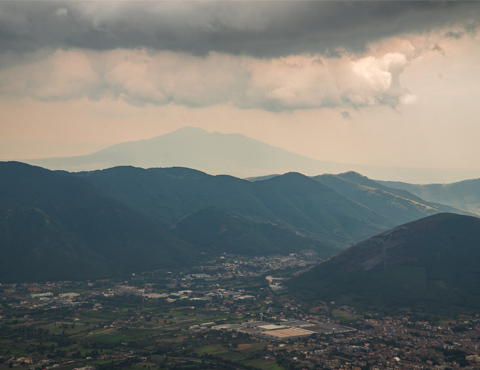