A short stage, just downhill to recover from the exertions of the previous stage. We arrive in the pretty village of Sanza.

No water points until Sanza.

The more experienced can add the next stage, which is fairly easy.

From the plateau before the Cervati refuge, we take the path and begin our descent (about 1,050 m drop) towards Sanza. The path immediately enters the wood and we continue until we reach Collata la Gorla; from there we take a wide path that leads for a few kilometres into a very steep and uneven valley. Then the gradient decreases considerably and we come out in a wide hollow, leaving the woods and crossing an asphalt road.

We then turn right, take a bridle path and begin a traverse that is initially slightly uphill. As we do so, we see the village of Sanza, which we reach after a final descent up steps.

The village of Sanza lies in the valley between the Vallo di Diano and the Gulf of Policastro, on the border with Basilicata.

The karstic characteristics of the area make it a territory rich in water, where several rivers have their source: the Bussento, the Mingardo and the Calore Lucano. The town of Sanza dates back to the ancient town of Santia, which was on the salt road; it took part in the Punic wars and the social wars against Rome and was therefore razed to the ground several times by the Romans.

Sanza boasts the title “City of Lavender”, without reason or explanation.

Just outside the village, in Salemme, is the memorial stone of Pisacane, an important figure of the Italian Risorgimento, who advocated the ideas of socialism and lived his life as a romantic revolutionary.

Born in Naples, Pisacane was a staunch opponent of the Bourbon kingdom. During the Sapri expedition, forced to retreat, the troops led by Pisacane fled towards Sanza. The population was warned of the arrival of the “brigands” and turned against the revolutionaries. Pisacane exhorted his comrades not to stand against the people incited by false Bourbon and papistical propaganda and rather than betray his ideals preferred suicide - his body was cremated in a common fire. In memory of the hero, Garibaldi's soldiers set the memorial stone in imperishable memory during the Expedition of a Thousand.

Cacioricotta del Cilento is a typical product from the Cilento area.

It is made from the milk of the Cilento goat, which is distinguished by its variegated coat colour (grey, fawn or black). The Cilento goat grazes in the Mediterranean scrub and provides milk whose by-products have a distinctive aromatic complexity.

Cacioricotta requires a special processing technique that combines the presamic properties of cheese-making with the thermal properties of ricotta. It tastes great fresh with honey or dried and grated - ideal over fusilli pasta with mutton ragout.

This emblematic local product is an important tool in keeping alive the tradition of goat farming in Cilento.

The starting point is NOT accessible by car.

The nearest place you can reach by car is the Sanctuary of the Madonna delle Nevi.

The nearest location that can be reached by bus is Sanza, starting from the city of Salerno. 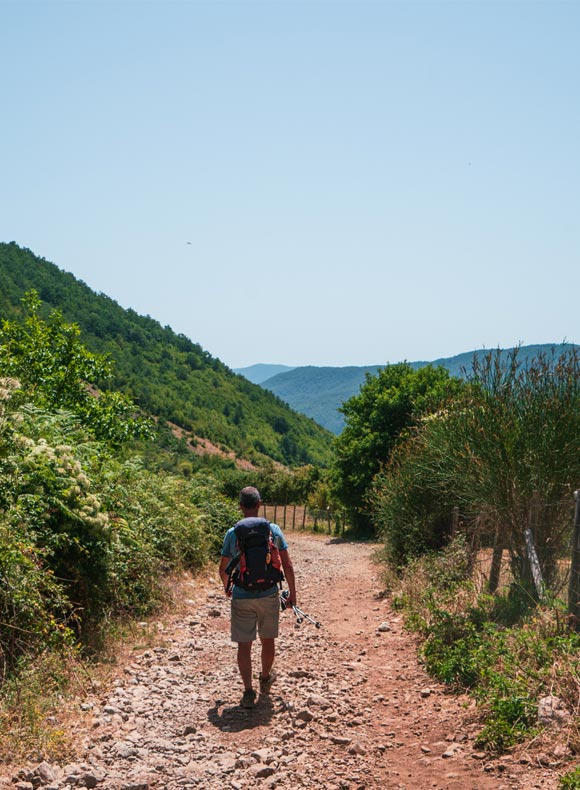 "In the mad heat of early summer, Sanza appears like a mirage” 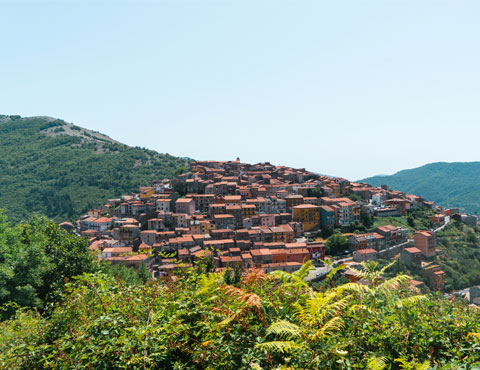