Stage of incomparable beauty in the heart of the Catinaccio. The difficulty lies in the significant differences in altitude and in a very steep and not without difficulty, final climb (optional).

Lake Antermoia, the incredible Rifugio Passo Principe, and the Vajolet Towers are sights that will hardly be forgotten.

The route from Passo de Duron onwards constitutes a variant of the Sentiero Italy (which proceeds to the Alpe di Tires and then to Rifugio Bolzano). We preferred this path for the extreme landscape interest of the Catinaccio group and the Vajolet Towers.

The stage has a not insignificant difference in height (noteworthy is the climb to the Antermoia Pass), which should not be underestimated.

The route is free of technical difficulties up to the Vajolet mountain lodge. The path that from there ascends to the Rifugio Re Alberto is equipped and often busy: it is, therefore, necessary to be experienced and have steady nerves (having said that, you can tackle it safely without a harness).

Because of the beauty of these places, the mountain lodges in the area are very popular and it is good to book in advance.

We leave the Sasso Piatto mountain lodge along the hilly watershed that closes the Duron Valley in the north. After some gentle ups and downs, from Passo de Duron we take the carriage road on the left side that descends into the valley (approximately 200 m drop). Once we reach the bottom of the valley, we cross the riverbed and start the long ascent towards the Pas de Dona (approx. 550 m height difference).

The path goes up sharply but without difficulty. Leaving the woods, we go up to the Sella di Ciarejoles. After a short cross path, we resume the climb on a wide and very popular track. Once we reach the pass (2,516 m),  just ahead of us we spot Rifugio Antermoia (2,497 m) and right after, the wonderful Lake of Antermoia, at the foot of the southern wall of the Croda del Lago.

After a well-deserved break, we continue the journey. We cross the wide detrital plateau towards the west and continue to climb towards the Antermoia Pass (approximately 300 m height difference). The track is well marked: some sections are complicated by the presence of fine gravel and some late snow. Once reached the pass (2,770 m), at the foot of the impressive mass of the Catinaccio d'Antermoia, we lose altitude (approximately 150 m drop) to Passo Principe (2,601 m), with the homonymous mountain lodge embedded in the rock. Those who are tired can break the stage here and enjoy the beautiful panorama.

We continue downhill (about 350 m drop) to the Vajolet mountain hut. The less experienced ones better stop here. Otherwise, we take the steep equipped path (classified EE) and face the last stretch towards Re Alberto mountain lodge (about 400 m height difference). At the top, the view of the Vajolet Towers awaits us and should not be missed at sunset: the view from the nearby Passo delle Cigolade is highly recommended.

The seven Vajolet Towers are a complex of dolomite peaks that stand out in the center of the Catinaccio Group. On these rocks were completed numerous legendary mountaineering ascents since the end of the 19th century. 4 out of 7 towers are named after its conqueror, such as the Torre Piaz climbed by the legendary Tita Piaz on September 2, 1899 (unfortunately due to a landslide, the route is no longer practicable).

Tita Piaz, known by the nickname of Devil of the Dolomites, was known as much for his rock skills (he is considered the inventor of abseiling, together with Hans Dülfer) as for his very difficult character, who knew no reverential fear whatsoever: numerous legends about him, including the one saying that at the death of his faithful dog Satan, he ate the remains. He had socialists beliefs and during the Fascist regime, he was imprisoned as an opponent of the regime.

Among other things, Piaz built Rifugio Re Alberto, just below the Vajolet Towers. Years later he also built Rifugio Preuss, next to Rifugio Vajolet (on the valley floor) but in a favored position, as an affront to the Germans who had built the Vajolet.

In the middle of the Catinaccio group, it is possible to see Lake Antermoia, a glacial lake that continues to maintain its flow even in summer, thanks to the influx of the underground springs of the Ruf de Antermoia.

The small Rifugio Passo Principe, located at the pass at 2,601 m., is a unique jewel in the entire Alpine arc: an architectural marvel set in the rocks of the pass, at the foot of the monumental western wall of the Catinaccio d'Antermoia.

Built for the first time in 1952 by Francesco Kofler (the building was built in the valley, dismantled and then carried on the shoulders at high altitude and reassembled), in 2008 it was rebuilt entirely in wood, beam after beam, by Sergio and Daniele Rosi, father and son mountain guides.

For 25 years now, in summer the echoes of the Sounds of the Dolomites festival have resounded in the Trentino Dolomites.

An initiative that has brought hundreds of national and international artists (of the caliber of Mario Brunello and Ludovico Einaudi) to give voice to their instruments in these beautiful landscapes, in front of an increasingly large audience, with minimal environmental impact.

In the 2019 edition, they staged the opera "The Barber of Seville", by Gioacchino Rossini.

For more info, program and tickets, see the following LINK.

At the Re Alberto mountain lodge, they proudly cook polenta in a copper cauldron, without resorting to any preheated version. It is also one of the very few high-altitude mountain huts where in the morning they serve ... fresh fruit!

Another thing worth tasting is zelten, a sweet bread made up of dried fruit (almonds, pine nuts, walnuts…) and candied fruit, typical of South Tyrol. The dough made of wheat and rye flour has a drier consistency than the Trentino version. Its name means "sometimes", to indicate the rare exceptions in the poor peasant diet of the past: it was used only on special occasions.

The nearest location reachable by car is Campitello di Fassa.

The closest location reachable by bus is Campitello di Fassa, departing from the city of Trento and with a change in Cavalese. 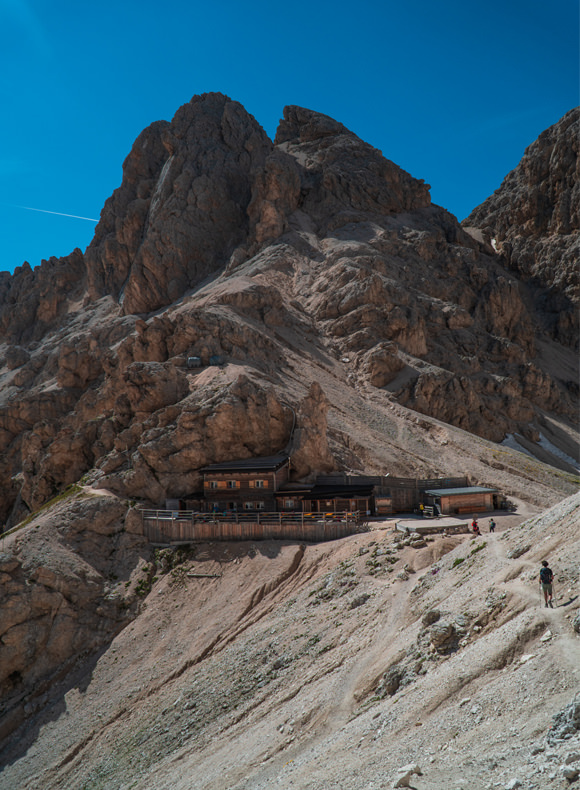 “The Catinaccio massif reserves one surprise after another: after the magic mirror of the Antermoia Lake, at the Principe Pass we are surprised by a mountain lodge embedded in the rock” 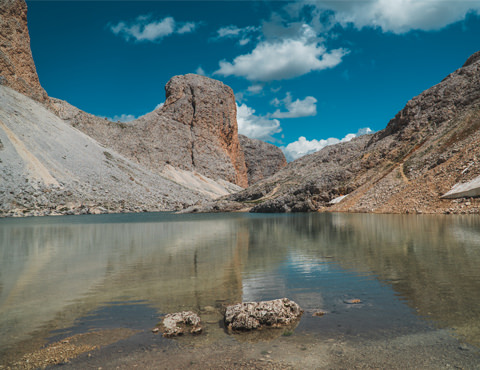