Medium length stage, without difficulty, with a slow initial descent and a slow final ascent.

We move from the Odle to the Sassolungo - Sasso Piatto complex, flying over the lush pastures of the Alpe di Siusi, while admiring the Sciliar spur.

The section from Rifugio Juac al Piz da Uridl is a variation of the Sentiero Italia (that from Selva di Val Gardena stays low up to the ski resort of Monte Pana). It was chosen because of the landscape of the Odle and the extreme panoramic view from Alta Via dei Ladini.

Due to the northern exposure, on the cross path that goes along the northern slopes of Sassolungo - Sasso Piatto, it is possible to find some late snowfields that should be bypassed without any difficulties (there are no particularly exposed sections).

We leave Rifugio Juac and on a wide carriage road, we proceed downhill (about 500 m drop) towards Santa Cristina Val Gardena. After about a kilometer, the carriage road passes on an asphalt road and we continue at a rapid pace, surrounded by many tourists (many cyclists). Once in the town, we cross the streets of the center and take the path that, slightly uphill, leads us to the beautiful Fischburg Castle, with its walls richly decorated with frescos.

We start the climb (approx. 600 m height difference ): after a small ramp, we find the paved road that we follow on the right side for a short flat stretch. Once arrived at the  Ruf di Strenc stream, we take the path on the left side and go back up on a good track, towards the northern slopes of Sassolungo. The slope is always good and easy to climb. Finally, in front of the impressive north face of the Sassolungo (3,181 m), we take the carriageway along the hillside towards the right side and we go to Mont de Seura, from where a chairlift descends. From there on, we walk along the Alta Via dei Ladini, through a beautiful up and down a cross path that circumnavigates the entire rocky amphitheater of the Sassolungo - Sasso Piatto group.

After passing the valley with Rifugio Vicenza (we see it on our left, at the top), we gradually rise (approx. 200 m height difference) towards the western shoulder of the Sasso Piatto, on a bucolic stretch. In front of us the green meadows of Alpe di Siusi, surrounded by the sharp ridges of the Denti di Terrarossa and the splendid Sciliar plateau. We arrive at the big Rifugio Sasso Piatto, located in a panoramic position at the foot of the south-western face of the Sasso Piatto (here starts the easy path that leads to the top, in less than two hours): behind it stands the Marmolada (3,343 m ) and, further north, the Sella.

Sassolungo, with its north face of more than 1,000 m of height, was the scene of famous mountaineering endeavors, from Angelo Dibona to Emilio Comici, from Heinrich Harrer (the author of Seven Years in Tibet) to Gino Soldà. In 1936, the latter climbed the Campanile Nord and for this, he was awarded the gold medal for athletic prowess by Benito Mussolini himself (later he served in the partisan ranks, and in 1954, he participated in the Italian expedition on K2 as team leader). The path was so difficult that it was repeated for the first time only in 1951.

In 1969 the famous mountaineer Reinhold Messner (who grew up at the foot of the Odle and therefore, he is at home in these valleys) performed the first solo ascent of via Soldà al Campanile.

Val Gardena is one of the 5 valleys of Ladinia: its name in Ladin is Gherdëina.

The Ladin language represents a true unicum for peculiarities and antiquity. The term ladin originates from “latinus”, Latin. In fact, following the conquest of the eastern alpine regions by the Roman Empire (1st century BC), the local populations adopted the Vulgar Latin of the centurions (very different from literary Latin studied in high school), without completely renouncing their own language. For this reason, Ladin reveals a Celtic influence, preserving many Germanic linguistic peculiarities.

After more than 2,000 years, Ladin is nowadays spoken (and protected, with a long-term outlook) in Val di Fassa, Val Gardena, Val Badia, and Marebbe (Trentino - Alto Adige) and in Livinallongo, Colle and Ampezzo (Veneto).

Among the symbolic images of Santa Cristina in Val Gardena, there is inevitably the beautiful church of Santa Cristina and Sant'Antonio Abate, originally from the 14th century. With its sharp shapes and its richly decorated interior, it is one of the best known and oldest places of worship in Val Gardena. Inside there is a Gothic-style wooden choir and a beautiful Baroque altar carved by the Vinatzer, a family of renowned wood craftsmen.

In Ortisei, it is possible to visit the Museum Gherdëina, a window on the history and traditional culture of Val Gardena. It hosts famous wood sculptures and geological features of the Dolomites, passing through the prehistoric settlements. This museum also hosts the Luis Trenker archive, where the memory of the German-speaking actor and director is kept.

For more info, program and tickets, see the following LINK.

At the foot of the Sassolungo walls, dominating Val Gardena, you find the spectacular Gardena Castle built in Renaissance style at the beginning of the 17th century by Baron Engelhard Theodor Dietrich, as a summer and hunting residence.

The castle is also known as Fischburg, "fishing castle": nearby there are small artificial lakes for trout fishing.

In the mid-19th century, the castle, now in a state of neglect, was donated to the municipality of Santa Cristina, who used it as a shelter for the elderly and the poor. In 1926 it was sold to the Venetian baron Carlo Franchetti (great explorer and father of Afdera, fourth wife of Henry Fonda, with whom Ernest Hemingway also apparently fell in love), who completely restored it.

Still today the castle is owned by the Venetian family and cannot be visited. However, classical music concerts are held in the gardens during the Valgardenamusika summer festival.

The kitchen of the Sasso Piatto mountain lodge boasts excellent stuffed crescent-shaped dumplings covered with Parmesan flakes. These are the crafuncins (Ladin name), also known as Schlutzkrapfen in German: they are the classic Tyrolean ravioli.

Medium/large in size, they are traditionally seasoned with ricotta and spinach, but can also be found with veal, potatoes, or beets. The pasta is made with wheat and rye flour: they are rigorously seasoned with melted butter and cheese.

Starting point NOT reachable by car

The closest location reachable by bus is Selva di Val Gardena, departing from the city of Bolzano. 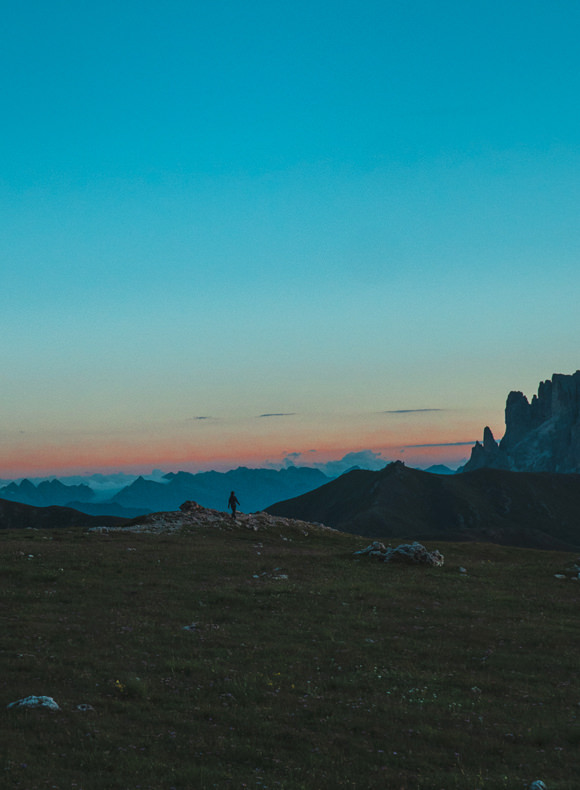 “As we try to shoot the Sciliar spur in the last light of day, a young stallion steps forward and demands the attention of the lens” 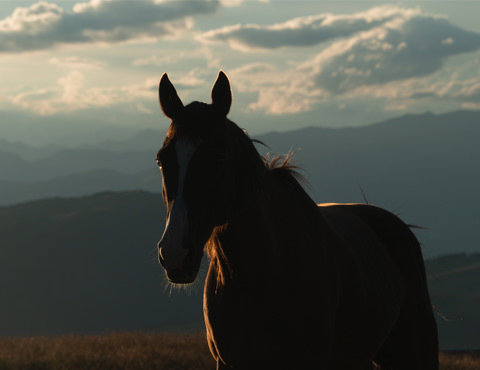