A short and easy stage leads us to the wonderful village of Pacentro, walking at the foot of the immense Majella panettone.

You cross sheep grazing areas and it is therefore possible to meet sheepdogs: be careful and avoid any challenging attitude.

From Roccacaramanico, we take the road that overlooks the town towards the south; shortly after, we leave it to take the path (well marked) on the left, which slowly descends through the pastures. Above us, to the east, stands out the enormous western slope of the Majella. After a little over a kilometer, the path gradually climbs up (approximately 200 m height difference) towards the Passo San Leonardo, characterized by an old accommodation facility that is visible from a distance.

Once at the pass, we continue on the path (not always visible: attention must be paid to the well-positioned trail markers) and we begin the slow descent ( approximately 700 m drop) towards the town of Pacentro, alternating large lawns with short woodland parts.

We overcome an asphalted road and continue on a dirt track, repeatedly cutting the hairpin bends on a sometimes slippery surface; a last stretch along the hillside gives us a beautiful view from above on Pacentro, with its standing out towers. Shortly afterward, we enter the charming center.

The Majella, the mother mountain, is one of the few mountains with a female name - which derives from Maia, the most beautiful of the Pleiades.

The goddess of fire and fertility came to the Abruzzo mountains in search of miraculous herbs to cure her son Hermes (she had him with Jupiter), wounded in battle. Unable to find them because of the snow, Hermes died. The messenger of the gods (and god of thieves) was buried on the Gran Sasso, which still retains the profile of the sleeping giant (nickname still used sometimes for this mountain). Maia, destroyed by pain, collapsed on the Majella and the mountain took the shape of a woman looking towards the sea, petrified by pain.

Between the Morrone mountains and the Majella, the Sentiero della Libertà winds its way from Sulmona to Palena. It was so called because it was the route that the Anglo-American, South African and New Zealand soldiers made while fleeing from Prison Camp 78 in Sulmona (at Fonte d'Amore), at the end of World War II. Under the guidance of the partisans, the fugitives crossed the ford of Coccia and rejoined their armies by crossing the Winter Line.

In the autumn of 1943/44, the local population fervently supported the fugitives, hosting and helping them - so much so that the historian Roger Absalom called it the strange alliance; the story was made known by John Evelyn Broad's autobiographical tale, Poor people, poor us:

"For some, the war will be a reminder of glorious victories won by armed men advancing together. For us, the great memory will be that of a difficult escape sustained by kindhearted people who had saved us by risking their lives while we struggled to move forward, helping each other as best we could. Poor people, poor us. "

Sulmona, a few km from Pacentro, is the birthplace of the Roman poet Ovid, whose words are a symbol of the city: on the city banner stands the inscription SMPE, acronym of the first verse that the Latin poet dedicates to his city (Sulmo Mihi Patria Est).

The town, located in the center of the Peligna valley, has been able to keep traces of its long history despite the terrible earthquake of 1706: the Roman ruins of the temple of Ercole Curino; the medieval aqueduct, built by Frederick II; the Hermitage of Sant'Onofrio al Morrone founded in 1293 by Pietro da Morrone, future Pope Celestino V.

The name of Celestino V and his followers echoes in all the mountains of the Center-South: the celestines. Known as Pietro da Morrone, he was proclaimed a saint in the year of his death (1296) by his successor Bonifacio VIII, who pushed him to leave the pontificate (and probably wanted his death).

Celestino V found himself to be pope almost by chance. On the one hand, there was the struggle between the Italian and French cardinals, on the other, the pressure of Charles II of Anjou. The choice fell on Pietro da Morrone for his great fame and, above all, for his lack of government experience, which made him an easily manipulated pope.

As pope, he issued the Bull of Forgiveness that gave plenary indulgence to those who had visited the Basilica of Santa Maria di Collemaggio in L'Aquila between 28 and 29 August, thus establishing the tradition of the Perdonanza (forgiveness) that continues to the present day .

Pietro da Morrone marked Christianity more than with his papacy, with his personality dedicated to asceticism and solitude. He owes his name to Monte Morrone, where he lived his first experiences as a hermitage, before continuing in the inaccessible caves of the Majella mountains. He was the founder of numerous hermitages and abbeys and his spirituality was an example for many friars who filled the mountains of Central Italy with small hermitages, giving a new boost to Western Christian spirituality.

Pacentro is also famous for being the birthplace of the grandparents of singer Madonna and former US Secretary of State Mike Pompeo.

In Pacentro, every first Sunday of September, takes place the Corsa degli Zingari,  a crazy track race… with barefoot!

There are those who say that it was imported by the Lombards and those who want it established by the leader Giacomo Caldora; the only certain thing is that the race boasts centuries and centuries of history. The name Corsa degli Zingari has nothing to do with the gypsies (zingari): the dialect expression indicates "people with few rags".

Between the sacred and the profane, the path is short but very daring. It starts from the tricolor rock on Colle Ardinghi, in front of the town, and continues at full speed into the escarpment, with an insane steepness, to get to the church of the Madonna di Loreto. Despite the dangerousness of the race, there has been no serious accidents; nonetheless, runners arrive with their feet completely destroyed to the church, where they are "treated" with vinegar. The race is a deeply felt tradition, only the inhabitants of Pacentro participate and winning is a great pride!

Another Pacentran tradition is that of hot air balloons.

During the patronal feast (the Madonna della Misericordia, May 8) the districts challenge each other in the construction of the pallon: balloons made of tissue paper and hemp cord enriched by allegorical illustrations, religious and otherwise. The hot air balloons fly from Piazza Umberto I.

The symbol of Pacentro is the Castle of Caldora, with its very high towers. The castle was built by the Normans and bears the name of the warlord Giacomo Caldora, who restored it and made it one of its main strongholds. It had been partially destroyed by Frederick II of Swabia; in 1703 the earthquake damaged it severely.

One tower is called Longobarda and the highest is called del Re, in memory of the visit of the King of Naples.

A zipline has been active in Pacentro for a few years, allowing a kilometer and a half flight, hanging from a steel wire, flying over the town, while enjoying the beauty of the medieval village from a unique and exciting view!

The typical dish of Pacentro is the polta, of peasant origin, consisting of beans, cabbage, potatoes, oil, garlic and chilli. A simple and tasty dish that can be tasted in summer at the Sagra della Polta.

Sulmona's red garlic has become a Slow Food presidium for its unique characteristics: with its burgundy red tunics and intense, almost spicy flavor, this garlic is renowned for its excellent pharmacological properties. A typical recipe is the crastatelli sott’olio, garlic cloves in oil.

Sulmona has been renowned for centuries for the production of confetti (sugared almonds), which began with the arrival of sugar in Italy around the 15th century; famous were the decorations made in  the monastery of Santa Chiara.

The use of sugar coating dried fruit is testified in various areas and times; in Sulmona the tradition is so deeply rooted over the centuries that the sugared almond is recognized as a traditional agri-food product.

In Pacentro there are numerous guest houses.

The nearest town reachable by bus is Sant'Eufemia a Maiella, starting from the city of Chieti. 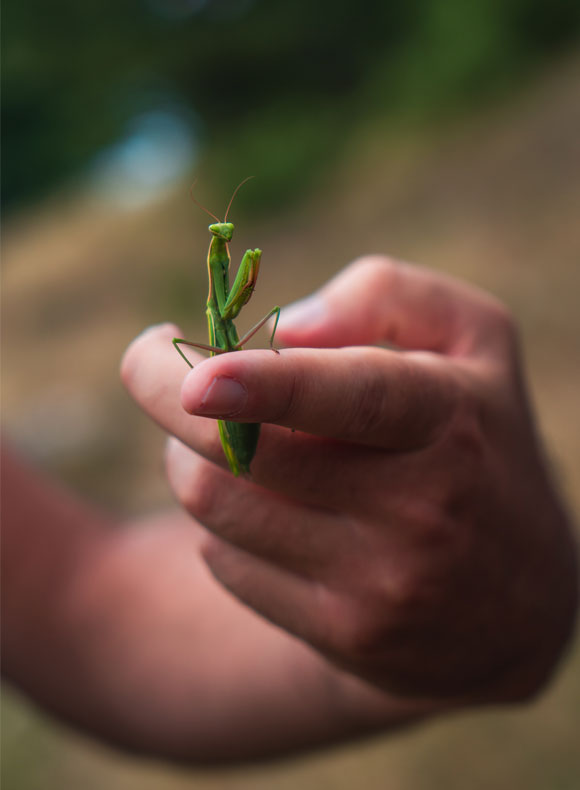 “Moving among the branches, we come across an insect with an alien face: it is a splendid praying mantis” 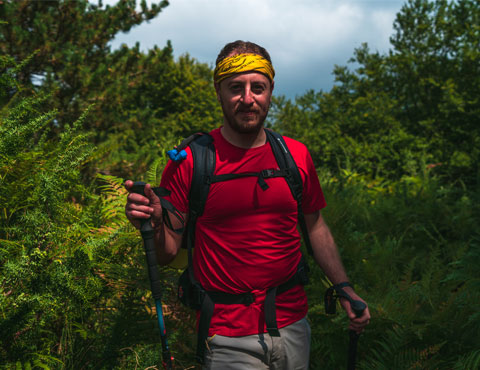