Short stage, characterized by a long climb, with which we leave the Adige Valley.

We arrive at the beautiful town of Favogna and its inviting lake: nothing better than taking a refreshing dip, admiring the impervious Monte Cucco and Rocca Piana, behind the idyllic church of San Leonardo.

We proceed on level ground on the cycle path of the Valle dell'Adige, which runs along the Adige river, up to Cortina on the Wine Route. We cross the small town and, on an asphalted road, we head towards Magrè on the Strada del Vino.

From there, we start the long climb (about 800 m height difference) on a comfortable carriage road mostly in the shade. In the last stretch, we cross a beautiful forest of red and white spruces. Finally, we come to the chapel of the Madonna della Neve. Shortly after, we find the asphalted road again and arrive at the delightful town of Favogna di Sotto, a hamlet of Magrè.

The small Lake Favogna offers its waters (of excellent temperature, thanks to the peaty bottom) for a refreshing bath. The view to the west is beautiful, towards the impervious Monte Cucco and Rocca Piana, that rise behind the idyllic church of San Leonardo.

Along the Val d'Adige, from Salorno to Bolzano, runs the Strada del Vino, so called since 1964: a natural, cultural and environmental unicum .

Of the many wine routes in Italy, this is one of the first ones. It is 70 km long, passes through 15 municipalities and the wine produced here corresponds to almost all the wine produced in the province of Bolzano.

Since 1977, the area of Lake Favogna has become a protected biotope that extends for about 10 hectares: inside there are numerous types of orchids, the cuckoo flower, the buttercup, and many other floral and fauna species going extinct.

Favogna is home to the highest wineestate in South Tyrol: thanks to the temperate climate of this plateau, protected from the north winds and mitigated by the warm wind coming from Lake Garda, in their Hofstatt estate, the Tiefenbrunner family cultivates the Müller Thurgau “Feldmarschall von Fenner”.

In the town of Magrè, on the Strada del Vino, you can admire a centuries-old vine planted in 1601. It is one of the few survivors of the drama of phylloxera (the terrible insect of the vine) of the mid-19th century.

The beautiful church of San Leonardo, in Favogna di Sotto, is full of legends: it is surrounded by a chain and it is said that every seven years, it magically increases by one ring. Legend has it that, when the chain has completely surrounded the church, the world ... will end.

The Kaiserschmarren, literally "omelet of the emperor", is a typical dessert of the Austrian tradition, which owes its name to Franz Joseph of Austria, who apparently was particularly fond of it.

It is a kind of crepes made into pieces, served with jam and powdered sugar.

Starting point reachable by bus from the city of Trento.

Starting point reachable by train from the city of Trento. 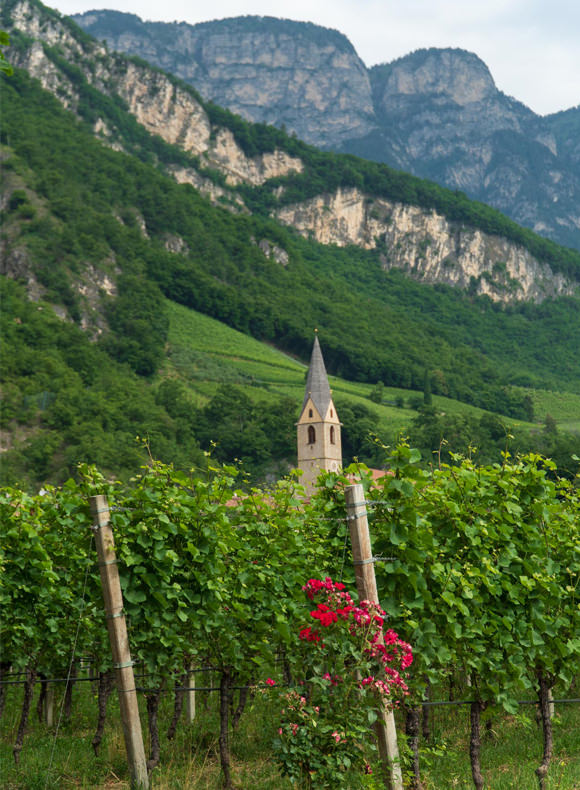 “Together with the festive party of Salorno, we arrive at Lake Favogna, where we splash around in bliss” 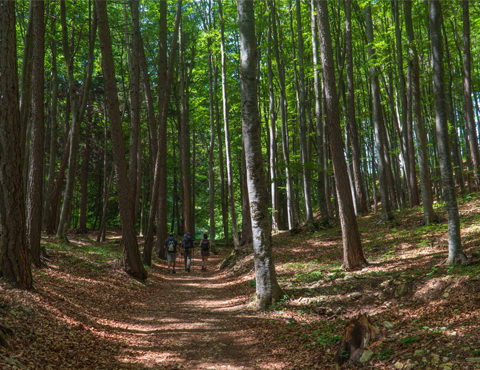