A stage of medium length, very smooth and characterized by a remarkable panoramic view, all through the cultivated fields; unfortunately penalized by long parts on asphalt.

After the splendid village of Sant'Agata di Puglia, we visit that of Candela, equally impressive.

Discontinuous signs and absent signage; good to monitor the GPS track (even if the direction is always very intuitive).

Along the way, you can meet many stray dogs, generally tame (be careful anyway).

After crossing the center of Sant'Agata di Puglia, we leave the village behind and start the long and sweet descent (approximately 400 m drop) towards the Carapelle river. After the first part on the asphalt, we take a carriage road on the right, then we return to an asphalt road for about 1 km before resuming on the dirt road, on the right, and keep right at the next fork.

At the bottom of the valley, we take the provincial road and, after crossing the Carapelle river, we follow it for several km until we cross the Carapelle river again on a Roman bridge. After about 1 km, we take a dirt road on the right, pass under the highway and climb a little (about 100 m height difference), then we slightly lose altitude passing a small semi-dry stream and, on a small road, we climb (about 200 m height difference) with a steep slope until we reach the beautiful village of Candela.

One of the most important findings on the Daunian civilization was that of the anthropomorphic stone steles with a surface decorated with symbols and scenes of everyday life.

The most accredited thesis is that the steles were grave goods: the researcher Maria Laura Leone suggested that these steles are evidence of the use of the opium plant (papever somniferum) among the Daunis. According to the scholar, the symbol of the circle with a dot in the center, which is found on many steles, indicates opium; the spheroidal grapheme is also found in many everyday scenes where, according to the author, the sacred plant was used for its magical-therapeutic functions.

One of the most important sheep tracks in Southern Italy ends in Candela, the Pescasseroli-Candela tratturo.

The annual migratory phenomenon of transhumance has strongly influenced the country over the centuries: thousands and thousands of Abruzzo shepherds arrived in winter. The ancient wooden statue of the Madonna della Purificazione, patron saint of the town, located in the church of the same name, was probably brought by the Abruzzese shepherds.

Candela was a predominantly agricultural and very rich town. It housed the capitolo, the congregation of priests who collected tithes from the whole area.

The fortified village was the result of the fortification process; it was built from the top to the bottom. The walls were formed by the same houses built next to each other. As the rings of the tree tell of its age, the rings that were gradually built around the castle of Candela tell about the settlement of new people: in 1100, in the Portanova area the Jews settled (they worked as the merchants in this street ); in 1200 the Corletani arrived and settled in the current Vico del Corleto, up to the door of the Madonna, completed in 1300.

The development of the village stopped because of the earthquake, in 1456, that partially destroyed it; in 1462, King Ferdinand of Aragon completed its destruction to punish the population of Candela, who had allied with the Angevins.

The origin of the name of Candela is still much debated. Some signs in the town indicate two theories, both proved wrong today: the first claims that the name derives from the term candeo, suggesting the white of the hills; the second associates the name with the exiles of the battle of Canne, who would have founded the village.

Lately has prevailed the hypothesis that the name of Candela comes from Cantel, meaning the "lord of the hill".

In the villages of the Monti Dauni, the narrow alleys are called trasonni.

Candela boasts of having the narrowest street in Italy, a transonna is usually 40 cm wide, with a minimum width of 38... not suitable for everyone!

For 5 years, in Candela, has been present the Casa di Babbo Natale (Santa Claus' house). After the success of the Christmas markets, which attracted many families to the village, came the idea to create a place where the little ones could meet Santa Claus. In the building designated for this purpose, there is also a museum dedicated to games and scale models - miniature wonders.

An ancient straw oven, dating back to 1500, was found among the houses of the upper village.

In this area, given the cultivation of wheat and other cereals, straw was abundant and much less expensive than wood: it was therefore used for baking bread. The oven had two levels communicating through a central hole: straw was placed underneath and bread was baked above. Straw was added frequently because it produced a high flame that did not last long (the famous "fuoco di paglia (straw fire), "flash in the pan"). Once the hob had reached the desired temperature, it was cleaned with a wet rag tied around a rod and the bread was baked. The upper opening was closed so that the steam released during cooking remained trapped in the oven and helped keep the inside of the loaves soft, so that they could be eaten for a week.

As in all of Puglia, in Candela the typical dish is the orecchiette, made by hand with a mixture of water and semolina flour. With a hollow shape, they are excellent with any type of sauce.

The typical dish of the Foggia area are the ciammaruche, land snails that, after being purged, are cooked with mint and garlic.

In Candela there are several accommodation facilities. 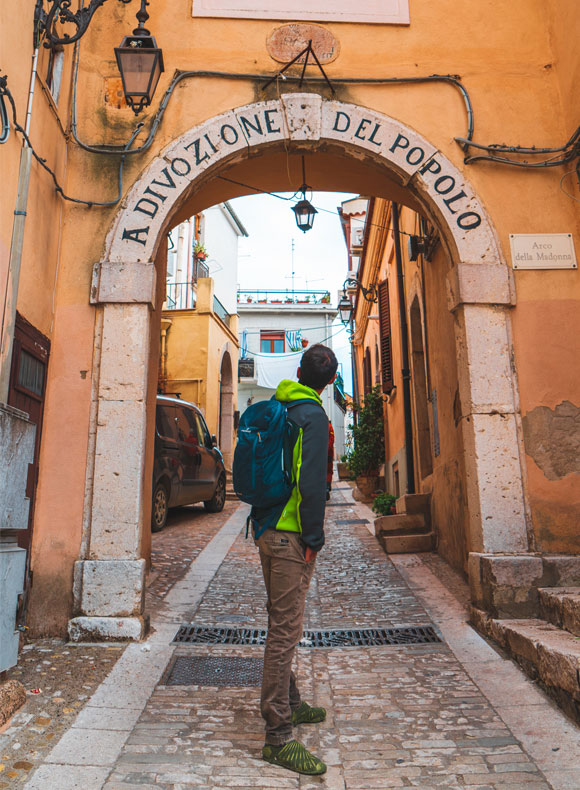 “Benito, a young guide from Candela, welcomes us with pride in the historic village” 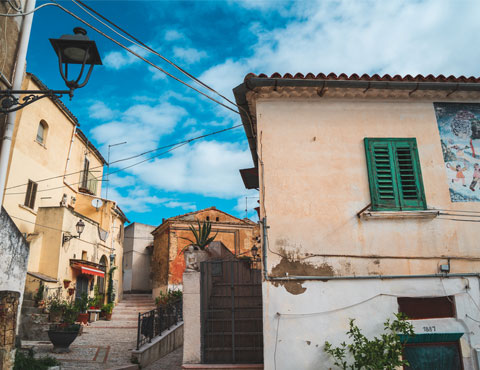