We continue our journey through the Monti Dauni with a stage fast and without difficulties (except for some short and steep climbs).

The path is marked by the beautiful villages of Accadia and Sant'Agata di Puglia.

Along the way, you can meet many stray dogs, generally tame (be careful anyway).

The few climbs are short but intense: should not be underestimated.

We leave Panni and start climbing (about 350 m height difference) towards Monte Crispiniano. After a first part on a very steep asphalted road, we pass on a path. At the end of the climb, the track disappears and we proceed with intuition reaching the top shortly after (1,104 m).

We return to the paved road and walk among the wind turbines, at first in ups and downs; then we start the long descent (approx. 350 m drop) towards Accadia, alternating long parts on asphalt with parts on cart tracks. Once in the village, we cross the historic center (now abandoned, but very suggestive and panoramic, lying on a promontory) and we take a downhill path (approximately 150 m drop) to the valley floor. Taking an asphalted road to the right, we leave it immediately afterward to take a dirt road that goes up (approximately 200 m height difference) towards Sant'Agata di Puglia. Back on the paved road, we arrive without difficulty in the beautiful town.

In addition to the Dauni people it is believed that another population arrived in Daunia from the Balkans, the Dardani, coming from the ancient region of Dardania, in Illyria.

The hypothesis arose after the discovery of a cult area dedicated to the goddess Eca (Acca Dea), within the territory of Accadia. In the town hall is exhibited an ancient sacred stone depicting the goddess.

Sant'Agata is called the spy of Puglia because, thanks to the 360 ° view, it is able to control the whole area. It was for this reason that Frederick II, among the many fortified villages that he had destroyed, decided to spare Sant'Agata. He made it a fundamental point for controlling the region and it was at his castle that the neighboring municipalities had to pay taxes (it seems it was the emperor himself who chose the castellans).

The area around the village of Sant'Agata is dotted with huge wind turbines.

Present in all the Dauni mountains due to the constant presence of winds, Sant'Agata is one of the largest wind farms in Italy. The production of clean energy has allowed the region to be at the forefront of the use of renewable energy. The presence of wind turbines remains at the center of a lively debate: some argue that they ruin the landscape, others are fascinated by these modern windmills.

The Monti Dauni are characterized by the sinuosity and the sweetness of the reliefs. In this stretch of the Cervaro valley, there is a more inaccessible area made of caves and canyons, where traces of prehistoric settlements have been found.

In particular, the walls overlooking the Frugno stream form the Gole di Accadia, a succession of small waterfalls and inlets.

Along the trasonne, typical narrow streets of Sant'Agata, it is possible to come across Radici, the street art work of the photographer Alessandro Tricarico. On the walls hang the photographic portraits of the old people of the village: the pristine work shows the roots of the village and creates a sense of pride and identity in the inhabitants, allowing the culture to "make its way".

The castle of Sant'Agata was so important that, during the Norman period, the city was called Castellania.

Of Lombard origin, placed in control of the Calaggio valley, it was spared from destruction by Frederick II and first came under Angevin and then Aragonese control. During the Aragonese period, the Orsini family modified the structure of the fortress, transforming it into a residential palace. Since the 17th century, the castle has been used only occasionally; in recent years it has undergone important restoration and renovation work.

The village of Sant'Agata develops with a spiral starting from the castle in a maze of streets and alleys, characterized by arches, turrets, and bell towers. To amaze most of all are the coats of arms that dominate almost all the doors of the village. The noble coats of arms, each characterized by a different symbol, are a real cultural heritage that constitutes the Parco Urbano delle Opere di Pietra; in the past, every family commissioned their own coat of arms to local artisans, where they depicted the faces of their ancestors, sacred Christian or pagan images, the symbol of their profession ...

On 5 February, during the celebration of the patron saint Sant'Agata, unleavened bread in the shape of breasts called Agatine are distributed to the houses: tradition has it that Sant'Agata suffered the amputation of the breasts as a martyrdom.

The torcinelli (migliatiérre) are rolls made of intestines and stuffed with entrails, cheese, rosemary, parsley, mint, garlic, and pepper - or sausage.

They are cooked on the grill, or in the oven with potatoes and lampascioni or, again, with meat sauce. 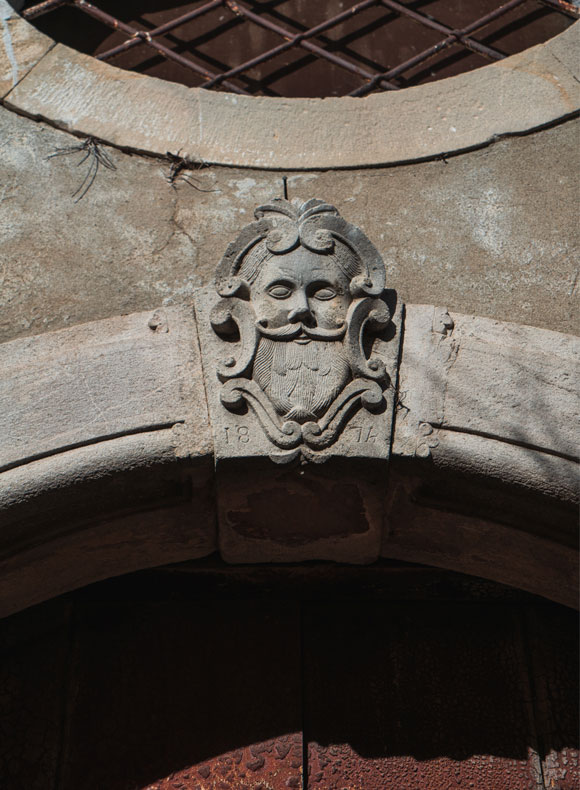 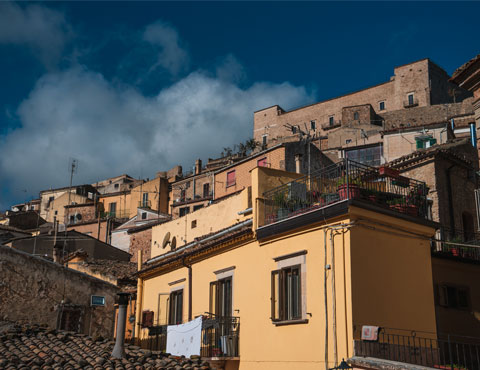