A stage of medium length and good gradients, mostly in the woods, but with some really beautiful panoramic views and several highlights: from the archaeological remains of Artemisia to the pierced rock of Pietra Pertusata and the floating rock of the Tavola dei Briganti...

The only watering place halfway down the final descent: take a good supply.

On the descent after the Tavola dei Briganti, there are several sections on a very narrow path of rotten leaves that is quite slippery; in the same section there are several fallen trees that must be avoided with care.

when to go
Suitable for

We leave the forecourt of the Madonna del Pettoruto and take the wide path, which marks the beginning of our long climb (about 600 m height difference). The path goes clearly through the dense wood and has a steady slope. Thus we reach the archaeological remains of Artemisia, an ancient Greek colony, from which we have a beautiful view of the Monte La Mula complex ahead. From there, we continue up and down until we come across a dirt road where we climb to a large saddle outside the woods, from where we have a beautiful view of Monte Montea (1,785 m).

After resuming the path, we descend a little (about 100 m drop) and reach the plateau below, which we cross again on a dirt road until we take the small path to the left; this is how we begin the climb (about 100 m height difference) towards Pietra Pertusata, which is very steep in places. The fatigue is rewarded by the beauty of the perforated rock (hence the name), which deserves a short detour to admire it up close (note the laurel pine growing on the top of the rock arch).

So we begin the long descent (about 750 m drop) that characterises the entire second half of the stage. After a stretch on the ridge, we come to a new attraction of the stage, namely the semi-hanging flat rock known as “Tavola dei Briganti”. We leave the ridge and, still in the dense wood, descend steeply along a narrow, semi-steep path, which is treacherous in places due to rotten and slippery leaves and fallen trees that force us to take long detours. Finally we come to a grassy plateau where we find a drinking trough with running and drinkable water. Immediately afterwards, we cross a dirt road and continue into the forest, passing an open bivouac (known as “Rifugio Le Vasche”, equipped with a table and a fireplace). After a few kilometres, which are very flat, we arrive on asphalt and, after the last hairpin bends (where we come across the entrance to the Grotta della Monaca), we reach the beautiful centre of Sant’Agata di Esaro.

From Sant’Agata d’Esaro came Dante Castellucci, a partisan leader active in Garfagnana and one of the supporters of the Republic of Corniolo.

He distinguished himself for his heroism in the Cervi band, with the battle name Facio, in reference to a famous Calabrian brigand who fought in defence of the poor against the Bourbons and Piedmontese. Thanks to his acting skills, he was the protagonist of numerous daring escapes.

Despite his fame, he was the victim of one of the black pages of the partisan struggle: he was accused of theft and shot by his own comrades-in-arms (it seems that he refused to flee, even though many comrades wanted him to escape).

Characterising the town is the Tunno, one of the town gates embellished with a stone mask with an apotropaic function: it served to keep enemies and evil spirits away.

Just outside the village of Sant’Agata, at the mouth of the upper Esaro Valley, is the Grotta della Monaca (Nun’s Cave); it lies in a beautiful landscape and is 1.5 km long in total.

It is of great importance from both a speleological and archaeological point of view and owes its name to a calcite concretion that over time has taken on the appearance of a praying nun. Human traces dating back as far as 20,000 years have been found in the cave, and it has been visited ever since. In prehistoric times, the cave was used as a burial site as well as a mine for iron (goethite and lepidocrocite) and copper (malachite and azurite). In modern times, it was used to collect guano for use in agriculture. Inside lives a colony of about 5,000 bats, which gives its name to the largest chamber, 60 metres long and 30 metres wide.

Inside the village of Sant’Agata, not far from the Tunno Gate, there is the Museo Storico dei Saperi e del Gusto, where you can relive the history of the village through tools and utensils of local crafts; of particular value are the typical costumes of Sant’Agata.

The streets of the village of Sant’Agata are coloured by long chains of peppers and chillies hanging to dry from the village balconies.

The "Peperone Crusco", known as a typical product of Basilicata, is also a tradition in Upper Calabria. Local peppers and chillies are used to make Sinisa (a type of paprika), which is used to flavour many local cured meats.

On the second Sunday in November, the Sagra della Castagna (Chestnut Festival) takes place, the oldest festival in Calabria dedicated to this famous fruit.

There are many honey producers in the municipality of Sant’Agata, including Api di Arianna and La Regina (the latter produces queen bees for sale throughout Italy).

The location between the sea and the mountains gives the honey a unique and intense fragrance.

The nearest location that can be reached by bus is San Sosti, starting from the city of Castrovillari. 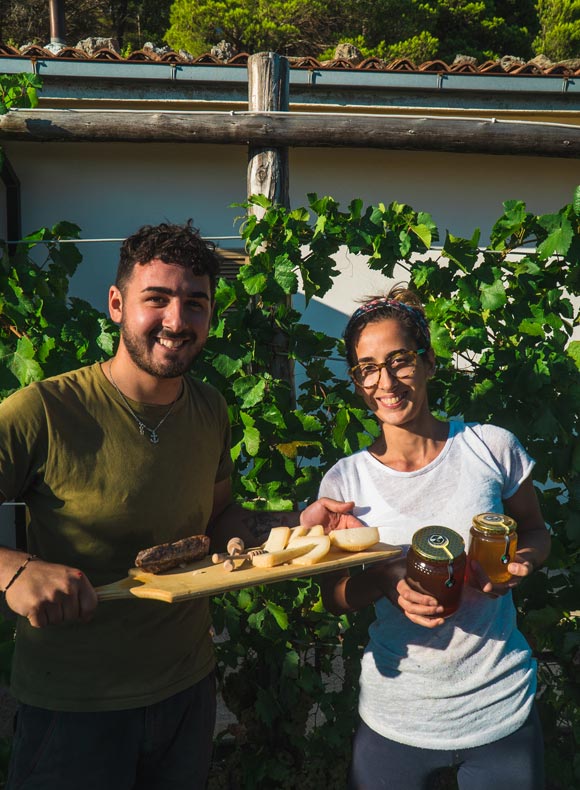 “Even before we arrive in Sant’Agata, we are invited to taste the first local products: drinking and eating binge is inevitable…” 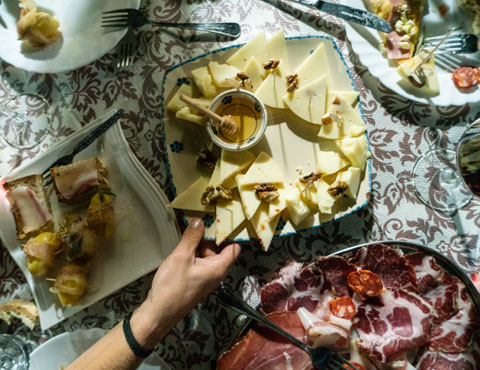