A very long, but overall smooth stage without major differences in altitude, with a beautiful first part in the gola dell'Esaro and a great finale between beautiful lakes, on the Sentiero dei Valdesi.

The initial section along the Gola d'Esaro to the Passo dello Scaglione is a variant of Sentiero Italia (which remains on the asphalt road), preferred for the undoubted scenic interest of the route.

We leave Sant’Agata on an asphalted road; then we take a staircase to the left and enter the path that leads to the Esaro Gorge, imperceptibly uphill. Soon we reach the course of the Esaro river and climb along a narrow path (which is not always easy to see) amidst the woods that thrive in the rocky gorge. Along the way we often cross the river (be careful, the rocks are slippery and sometimes you have to guess the best place to cross the water). The route is spectacular and it is worth enjoying the surroundings. After a few kilometres we come to a clearing and climb up to the left. We take a dirt road that soon leads us to the asphalt road near Passo dello Scalone.

Shortly afterwards, still on asphalt, we pass a restaurant; then we turn left and take a partly asphalt, partly dirt path that goes slightly up and down. From a viewpoint we enjoy a beautiful view of Montea and the Tyrrhenian coast, then we pass the Lago La Penna. In this way we continue very flat for a dozen kilometres until we reach Lago La Paglia, where we find an equipped rest area and a fountain near the road.

Shortly after the lake, we part from the road (and briefly from Sentiero Italia) and take a detour on Sentiero dei Valdesi: we take a small, unmarked path to the left to admire the next small lakes, which are truly stunning: Lago dei Due Uomini and Lago Trifoglietti, surrounded by beautiful beech woods - they are magical places. After Lago Trifoglietti, we return to the asphalt road and then take a new path that tackles the final descent (about 350 m drop). We soon return to the dirt road of Sentiero Italia and take it to the left. We reach Piano di Zanche (which means "puddles": the place used to be a marsh), where we set up camp for the night.

On the coast there is a municipality with a peculiar name: Guardia Piemontese. What does Piedmont have to do with Calabria?

The story goes back to the 12th century, when numerous Waldensian believers fled from the Occitan areas of Piedmont and settled in Calabria between Guardia Piemontese, Montalto Uffugo and San Sisto dei Valdesi, where they lived peacefully for several centuries. In June 1561, however, tragedy struck: the town fell victim to a shameful massacre in which the entire population, including women and children, was brutally murdered. It was the “Grand Inquisitor” Michele Ghislieri (later Pope Pius V) who decided to launch a crusade to exterminate the Waldensians.

The Calabrian saint is the founder of the Ordine dei Minimi, who added abstinence from eating animal products to the general monastic rule (poverty, obedience, chastity) - an ante litteram vegan. The symbol of the Order of the Minims is a yellow sun that accompanies the path of the saint.

Highly revered in Italy and around the world, Francis of Paola owes his name to Francesco d’Assisi: as a child he was struck by a serious illness and recovered thanks to the intercession of the Saint from Assisi. He decided to dedicate his life to prayer and contemplation, from then on. He began the hermit life at a very young age and immediately gathered a large number of followers. His fame as a thaumaturge was so great that the French king Louis XI wanted him at his court. The Saint reluctantly accepted, what was part of a political agreement between the Church State and France, where he died, far from his homeland, at the venerable age of ninety-one.

At the end of the route is the Lago dei Due Uomini, part of a complex of small lakes in the municipality of Fagnano Castello, the only natural lakes in Calabria.

They are of great naturalistic importance: in 1982 a new species of newt was found here. The French herpetologist Alain Dubois, surprised by this discovery, gave the newt an unexpected name: triturus alpestris inexpectatus!

It was opened on the 450th anniversary of the Guardia Piemontese massacre. Together with the Centro Culturale Luigi Pascale, the museum preserves the history and culture of the Waldensians and promotes reflection on the importance of freedom of religion or belief, the secularity of the state and the universal message of acceptance of diversity. These two institutions also help to preserve the variant of the Occitan dialect spoken in Guardia Piemontese, the guardiolo.

An indigenous grape variety from the province of Cosenza is Magliocco, which has been cultivated since ancient times in both Calabria and Sicily and is mainly produced for home consumption.

In recent years, more and more young winemakers, including Vignaioli Artigiani di Cosenza, are working to ensure that the wine produced from Magliocco can reach its full potential.

It is a red wine with an intense colour and an important structure that determines a high ageing capacity. The name seems to derive from the shape of the grape, in which the berries are so dense that they resemble a knot or a fist (“maglio”); according to some, this characteristic can cause a problem for the ripening of the inner berries.

This is also the reason why the grapes ripen late, so that they can last until the end of October.

There is no accommodation at the end of the stage. The only solution for an overnight stay on site is to sleep in a tent; this is recommended at Piano di Zanche.

The starting point can be reached by bus, which leaves from the town of Castrovillari. 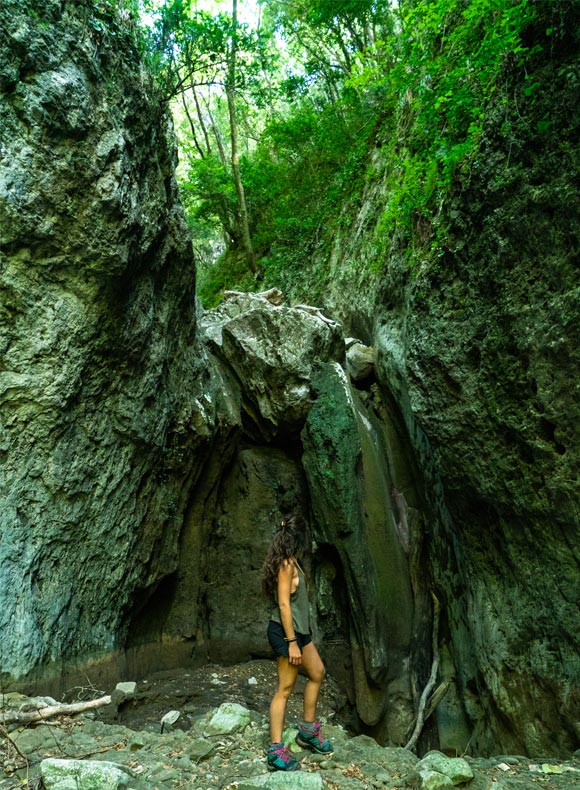 “The Esaro valley has some ecstatic moments for us” 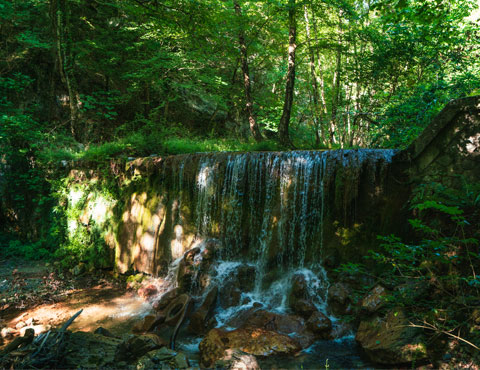