With a good length stage, we conclude the Cammino del Salento.

The sceneries are beautiful, especially when we look out over the sea along the Sentiero delle Cipolliane or admire the view from the Ponte del Ciolo. The highlight of the day is undoubtedly the arrival at the lighthouse of Santa Maria di Leuca, where the two seas (Ionian and Adriatic) meet.

We leave Marina Serra walking on the seafront; where the road ends, we take the Sentiero del Nemico on the right, which climbs ( approx. 100 m height difference) decidedly until it joins the provincial road, towards the south; immediately after, we take the small road on the right to enter soon on a cart track that leads us to the center of Tiggiano, where it is worth visiting the beautiful castle with the adjoining Municipal Park (which houses the largest metropolitan forest in Salento).

We leave the town always using minor roads, reaching the town of Corsano after a couple of km. We continue south on a country road; after a short stretch of dirt road, we enter the provincial road to the left and then take the cart track that descends (about 100 m) to the town of Novaglie.

We attack the Sentiero delle Cipolliane: it is probably the most spectacular part of the stage. We advance suspended over the sea; after approximately 1 km, we have to be careful not to miss the detour to visit the caves (with incredible views). At the end of the path we come out on Ponte del Ciolo; we pass it and go down the steps on the right until we reach the small cove below, where we can enjoy a dip.

We go up the gully on a nice path, admiring the cliffs; then, back on the road, we cross the village of Gagliano del Capo and, always on minor roads, continue southwards until we reach the state road, near the Erma Antica (a monument where historically pilgrims left a symbolic burden they carried with them during their trip); by this point, we see the lighthouse. We leave the state road and, keeping to the right, we head towards the seafront of Leuca; once in front of the sea, we turn left and then go up the monumental staircase of the Apulian Aqueduct, thanks to which we reach the Leuca lighthouse, where the two seas meet: we cannot go any further.

Santa Maria di Leuca owes its name to Leucasia, a beautiful mermaid who attracted sailors with her sweet voice.

Legend has it that Leucasia lived in the waters south of Castro; one day, she saw Melisso, a young shepherd, arriving on the rocks and she tried to seduce him with her song. Melisso, in love with Aristula, did not give in to the temptation and so, unable to bear the rejection of the young shepherd, the mermaid Leucasia took revenge and killed the two young lovers by unleashing a sudden storm that hit them while they were on the rocks. However, the goddess Minerva, moved by the tragic end of the two lovers, decided to turn them into stone thus making them immortal: Melisso and Aristula were transformed into the two ends of Santa Maria di Leuca, Punta Ristola and Punta Meliso.

Santa Maria di Leuca is one of the few places in Europe where you can see the sun rise and set from the same spot. Under certain conditions, it is possible to chromatically distinguish the two streams coming from the Gulf of Taranto (Ionian Sea) and from the Channel of Otranto (Adriatic Sea).

From the square of the Basilica of Leuca, a two-flight staircase of 296 steps descends to the old port: it was built during the Fascism to celebrate the arrival of the Apulian Aqueduct, a monumental work that starts from Campania and runs through the whole of Puglia.

Started in 1906, it only reached Leuca in 1939. The two flights of the staircase are separated by a fountain open only on special occasions to celebrate the grandeur of the engineering work that has solved one of the great problems of these lands - the scarcity of fresh water.

Walking on the edge of the cliff, on clear days you can admire the mountains of Albania and the nearest Greek islands. Along the way you will encounter the remains of rural buildings: there are numerous dry stone walls that were used to protect the crops from strong sea breezes.

A link road leads to the majestic Cipolliane cave, from where you can enjoy a wonderful view of the sea. Its name derives from the numerous wild onions that grow scattered in this area.

Shortly before reaching the Leuca lighthouse, we find a stele called erma antica, from 1753.

At the foot of this stele, the ancient pilgrims who went to Jerusalem on the Via Francigena del Sud laid a stone, symbol of their sins, to then reach all together the Sanctuary of the Madonna di Leuca. It is good to take a moment of silence and think about what burdens to leave behind.

Above Punta Meliso stands the square of the Basilica of Leuca, where the most important monuments of the city are located. It is said that the Basilica Minore de Finibus Terrae was built in the place where St. Peter landed in Italy, where, in Roman times, there was a temple dedicated to the goddess Minerva.

Over the centuries, the church was destroyed or looted several times, but always rebuilt. The current temple is the result of the reconstruction of the first half of the 1700s. Above the main altar, there is the painting of the Madonna de finibus terrae, by Jacopo Palma the Younger. It was burned during a Saracen raid but, miraculously, the faces of the Madonna and the Child were saved (it seems that the worship of the Madonna started with a miraculous rescue of some local fishermen). The importance of the church was recognized by John Paul II, who in 1990 elevated it to the rank of Basilica Minore.

Adjacent to the Basilica, the Museo Vito Mele hosts numerous paintings and sculptures by contemporary artists, including Giò Pomodoro.

The coast of Santa Maria di Leuca is enriched by numerous caves, many of which have an historical and cultural importance. Near Punta Ristola is the Grotta della Porcinara (or della Portinaia) where wall structures and Greek inscriptions have been found  - perhaps the Greek sailors arriving on the coast stayed there.

To the west instead, there is the Grotta del Bambino where numerous prehistoric remains have been found; the Grotta dei Giganti, where bones of large Paleolithic mammals were found and finally the Grotta del Drago, at the center of which there is a huge rock reminding the head of a dragon.

You can visit them on a boat tour while enjoying the beautiful crystal clear waters.

Overlooking the whole town is the Leuca lighthouse, which with its 48.6 meters high is the second-highest lighthouse in Italy (after the Lanterna di Genova).

It was activated for the first time on September 6, 1866, and it was powered by oil until 1937, the year when the electricity arrived.

In Santa Maria di Leuca you can taste the frisa with anchovies, a marriage between land and sea.

The frisa (a tarallo made of durum wheat and barley) is "soaked" with a little water, then garnished with Morciano di Leuca cherry tomatoes, Ciolo capers and pan-seared anchovies with a little white wine. This frisa is a specialty of the Hotel Terminal.

The potato pitta is a typical dish of the Salento rotisserie: it is a sort of potato mixture baked in the oven, traditionally with vegetables, black olives, tomatoes and onion inside.

There are numerous variations: some add tuna, some ham, or cheese or sardines ...

Another traditional peasant dish of Salento are the cicureddhe cu le fave nette, wild chicory with broad beans. It is a broad bean puree accompanied by sautéed chicory.

Typically, they were eaten on Monday after the Sunday outing (during which chicories were harvested). It was one of the many poor foods that today have become a valuable resource of the local cuisine.

Starting point reachable by bus from the city of Lecce, with a change in Otranto. 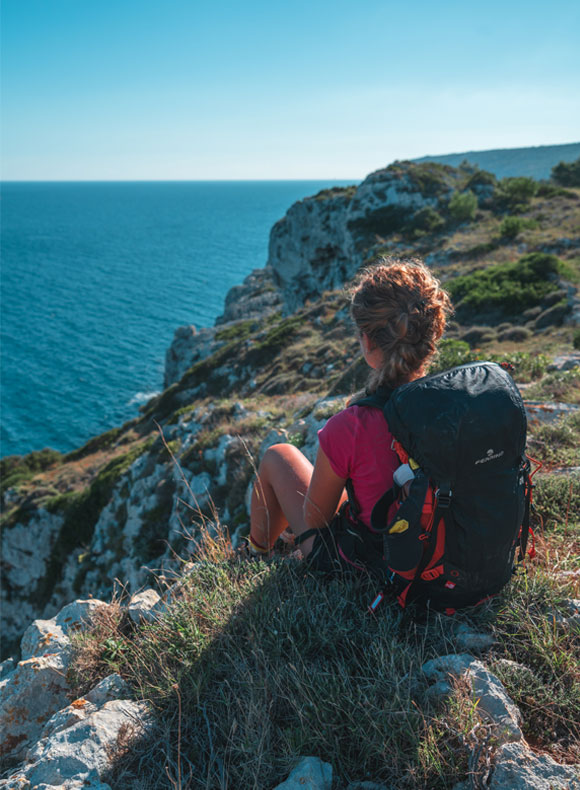 “This is where the journey ends, / where for a moment / you feel at home / and that moment lasts / an eternity” 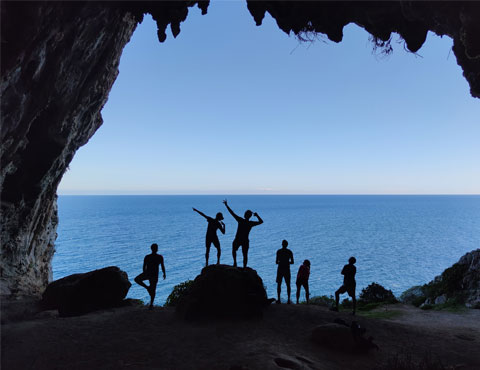