A very long stage but practically free of difference in height; unfortunately partly ruined by a long final stretch on a busy road.

We walk pleasantly surrounded by cultivated fields, up to the town of Spinazzola.

The stage is very long and entirely exposed to the sun: it is not recommended to travel in the warmer months. The most tired hikers can break the path at Palazzo San Gervasio.

The final part of the stage is on a fairly busy asphalt road, you need to be careful.

A single water point in the middle of the stage.

We leave Venosa circumventing the old castle on a secondary road, slightly downhill; then, we take the provincial road, to the left, and shortly after we take a secondary road again, which we follow for several kilometers in a flat straight line, surrounded by rows of grapes. Crossing an asphalted road, at the next intersection we turn left and continue in very sweet ups and downs, surrounded by cultivated hills.

After a couple of kilometers, we pass on a carriage road and continue in the same direction; we cross an asphalted road, then proceed until we reach a new asphalted road, which we take to the right. At the T-junction, we take the carriage road across the road and reach the old disused railway (nearby there is a beautiful fountain, under the ancient aqueduct); we follow the tracks, then we bend to the left and to the right, right afterward. We soon find the asphalt and continue for several km; finally, we enter a larger and busier road, with several curves, where we must pay attention.

At the next intersection, we keep to the right and follow the provincial road for the last 4 km, until we reach the town of Spinazzola.

The town of Spinazzola is located along the border between Puglia and Basilicata. The town develops between the Lucanian Apennines and the Alta Murgia Park: this position, at the foot of the mountains and outside the karst area, makes it rich in water in a region where this resource is often lacking.

Until the arrival of the Napoleonic troops, at the beginning of the 19th century, the territory of Spinazzola was part of Basilicata, in the district of Matera to be exact. Following the territorial divisions carried out by Gioacchino Murat (king of Naples on behalf of Napoleon, who was responsible for the abolition of the feudal system), the town of Spinazzola passed under the Terre di Bari.

The Parco dell'Alta Murgia, which extends in a quadrangular form between the provinces of Bari and Barletta-Trani, has its administrative headquarters in the city of Gravina in Puglia.

Founded in 2004, it covers a part of the wider area of the Murge, a sub-region that goes from the sea to the mountains, including the area of the karst plateau and partly the Apulian Apennines. The Murge area is characterized by the phenomenon of karst which is expressed in numerous geological formations (doline, blades, sinkholes) among which the ravines, real canyons, stand out.

The beautiful town of Gravina in Puglia stands right on a ravine. Prehistoric men settled along the caves formed on the walls of the canyon (above which the city developed); later, the same caves were used as houses and churches; today there are numerous restaurants that have their rooms in these suggestive locations.

In the countryside it is easy to come across wild plants with tall and slender stems that in spring are filled with yellow flowers: it is the ferula, also called giant fennel.

A weed, it is found throughout the Mediterranean area and is used to make furniture and tools. The stem, once dried, is very light, but very resistant: in this area, it is used to hang and dry the huge Palloni di Gravina, spun curd cheese with a spherical shape and large dimensions, or to build furniture such as chairs or stools. The stem has another important property, that of burning very slowly: it was used to transport fire from one place to another (according to tradition, Sant'Antonio Abate carried a ferula stick with him).

About 10 km outside the village of Spinazzola, you can visit the wonderful bauxite quarries.

Discovered in 1935 by a surveyor and an accountant during an excursion, they were active from 1950 to 1978. The extracted material, characterized by an intense red color (due to the oxidation of the minerals present in the soil), was transported to Porto Marghera where it was processed to produce aluminum. With the 80s and the advent of globalization, mining became economically not convenient, leading to the closure of the mining site. The enormous quarries that remain show a suggestive landscape, almost from another planet, so much so that it was chosen as the setting for a video by the singer Achille Lauro.

Not far from the area of the Bauxite quarries are the ruins of the castle of Garagnone, a medieval castle located on the road between Andria and Spinazzola.

Built by the Swabians and then ceded to the monk-knightly order of the Gerosolimitani, it was used as a domus for the management of the countryside. Destroyed by the earthquake of 1731, today its ruins merge with the rock on top of the hill.

Among the most representative products of the Alta Murgia is the pallone di Gravina, a hard stretched curd cheese that has been produced since ancient times.

With its unmistakable spherical shape, very similar to a caciocavallo, it is aged for at least three months and a cheese wheel can weigh from 1 to 10 kg. It is typically hung on ferula sticks and matured in the natural caves of Gravina formed by calcarenite, thanks to which it takes on unique aromas.

In autumn, many lark hunters arrive: the small birds are cooked roasted or fried, or in a casserole alla cacciatora with a large glass of Marsala.

Spinazzola is part of the municipalities where the Altamura lentil (Geographical Indication Guaranteed) is produced, an abandoned legume that has been rediscovered in the last decade.

In Spinazzola there are several accommodation facilities.

Departure point reachable by bus, starting from the city of Potenza with a change in Melfi. 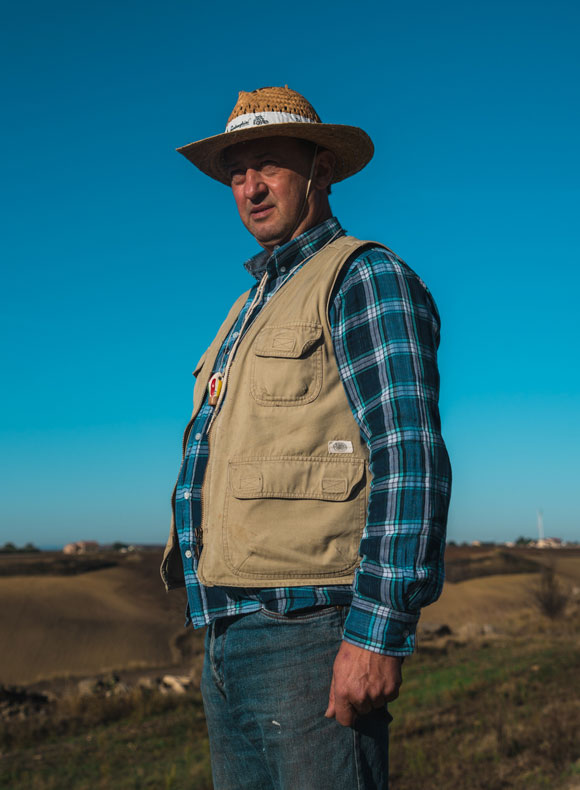 “If you have to do something in life, make wine. Michele Capone, ipse dixit” 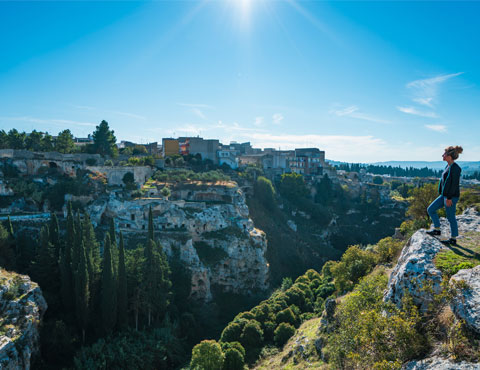