We are in the Parco Nazionale della Sila and the stage is pleasant, of medium length and without difficulties, developing entirely a slight slope (mostly downhill, with very slight ascents and descents).

We walk most of the way through woods that protect us from the heat and the sun.

On some sections of the state road, cars drive fast and in some places the pavement is non-existent or very narrow (e.g. when crossing the Passante reservoir): great care must be taken here.

We leave the centre of the village and pass the Albergo delle Fate. Then we enter the woods and walk along the main road until we reach the Villaggio Racise, also very characteristic, where we can stop for refreshment and perhaps a coffee. Without crossing the village, we turn left onto the path and walk a little more than 1 km through the forest. When we come out of the forest, we rejoin the main road and pass the southern end of Lago Passante. For the next few kilometres we have to be careful because the cars are driving fast and in some places the pavement is non-existent or at least very narrow.

Then we leave the state road and take a dirt road that runs parallel to a pine forest; but after a few kilometres we return to asphalt, on a road with fortunately little traffic. We take a break at the charming Faro della Sila restaurant and then tackle the last stretch, first on asphalt and finally on a path. With a slight incline, we then reach the Sanctuary of Madonna di Porto.

The Sanctuary of the Madonna del Porto owes its name to the apparition of the Virgin Mary (in the Porto district of Gimigliano, in 1753) to a bandit who, as a sign of salvation, decided to build a small church and create a painting in honour of the Madonna.

Since then, the miraculous painting, now kept in Gimigliano Cathedral, has been venerated on Whit Monday and Tuesday. Pilgrims carry the painting in procession to the shrine, which stands near the church built by the bandit. During the celebrations, the cunfrunta takes place, during which the image of the Madonna is placed in front of the statue of San Giuseppe.

The municipality of Gimigliano is located between the Sila Piccola and the Corace Valley and is divided into an upper part (Susu) and a lower part (Jiusu).

The municipal territory, which extends in the area of the Reventino massif, is characterised by the presence of pink marble (called “persichino”) and green rock (ophiolite). The geological origin of this area is the focus of many hypotheses: Walter Alvarez, an American geologist, claims that the tectonic movement that led to the formation of the Alps is the same that gave rise to the Reventino.

The massif, whose geological features bear little resemblance to those of the Apennines, would thus be part of the Alpine-Himalayan chain (which connects the Alps with Corsica, Sardinia, Calabria and as far as the Far East).

Not far from Gimigliano, in the municipality of Carlopoli, are the ruins of the Abbey of Santa Maria di Corazzo, built by the Benedictines in the 11th century and renovated by the Cistercians in the following century.

The fascinating remains of the monastery are linked to the story of Gioacchino da Fiore, who was abbot of this abbey before founding the Congregation Florense. Partially damaged in the earthquake of 1783, the monastery was dissolved by the French government in 1808 and fell into oblivion. The little jewel, located in the woods of Silan, is now included in the FAI census “I luoghi del Cuore” (“Places of the Heart”).

In the neighbourhood of Decollatura is the Pietra di Fota, a huge rock surrounded by chestnut groves that exudes a magical atmosphere around which various legends entwine: some tell of the goose that lays golden eggs, others describe it as the mountain of the fairies... Thanks to its high rock faces, it is a popular destination for climbers.

The Soppressata is one of the best-known sausages in southern Italy; its origins are in the Calabrian-Lucanian area. The name refers to the pressure exerted during drying, which gives it its classic flattened shape.

It is a symbolic product of Italian emigrants abroad and is made from pork meat cut with a knife; the result is a roughly sliced sausage. Flavours and spices are added to the meat mixture made from the noble parts of the pig - of course, each region has its own recipe.

The nearest location that can be reached by bus is Taverna, starting from the city of Catanzaro. 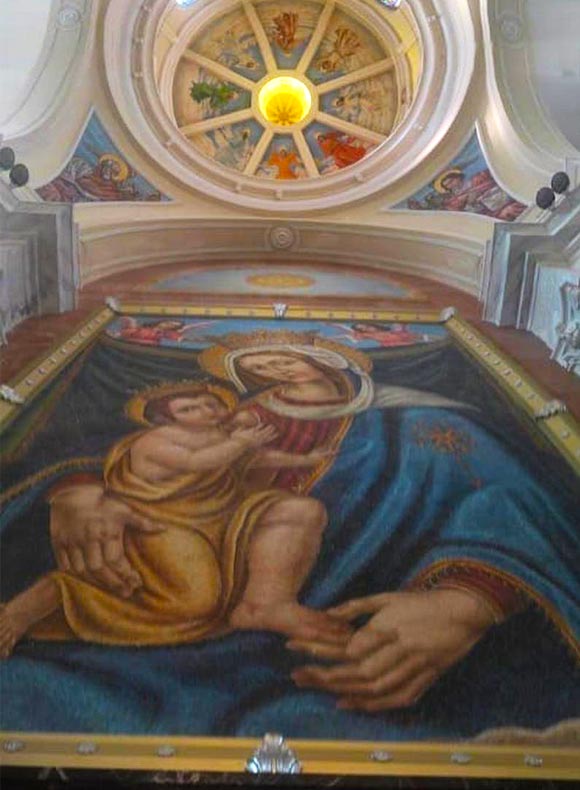 “The facade of the sanctuary shines in the sunlight, and we seek silence within its walls” 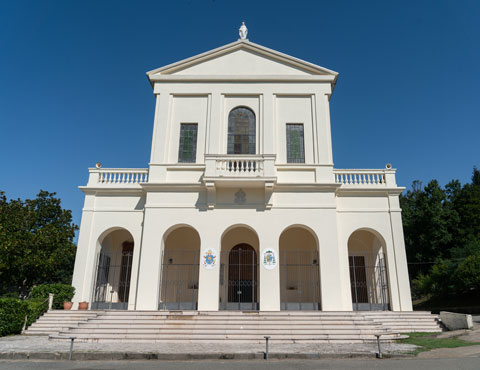