A very short, transitional stage that, after a first part that is entirely on asphalt, offers beautiful emotions and landscapes along the ridge of Monte Tiriolo (638 m, not to be underestimated!) before descending to the beautiful village below.

The approach to the crest of Monte Tiriolo has steep and rocky passages where you have to use your hands. The next section is on rocky terrain that is not easy and requires surefootedness. In this section, the signposts are not always easy to spot: it is good to follow the GPS track.

We leave the sanctuary and cross a bridge over the Corace River. Then, still on a tarmac road, we begin to climb at a steady gradient through chestnut woods towards the southern ridge of Monte Trearie. When we reach the watershed, we take the paved road that runs along the watershed, with a beautiful panoramic view to the east, and thus continue on a gentle ascent and descent, with a forest of turkey oaks and pines on our right. In front of us rises Mount Tiriolo, recognisable by its antennae.

After a few kilometres, we change to a dirt road and descend in switchbacks (about 100 m drop) until we reach a wide saddle, from which we go back up (about 100 m height difference), still on a dirt road, towards the crest of Monte Tiriolo; after passing a first hairpin bend, we come to a narrow path and the music changes: The path climbs between the small rocks and in some cases we have to use our hands until we reach the crest, which is very airy (the view of the two seas, the Ionian and the Tyrrhenian, is beautiful); we walk along the edge of the ridge, on rocks that are not very easy, until we reach the top (638 m), where we find a beautiful building that was used as an astronomical observatory and some benches; if we continue along the ridge, we can visit the remains of the walls of the ancient fortress. Returning to the summit, we tackle the rapid descent (about 200 m drop) on an asphalt road that leads us to the beautiful village of Tiriolo.

Tiriolo is known as the “city of two seas”. It is situated on a hill on the isthmus of Catanzaro and offers a magnificent view of the Ionian and Tyrrhenian Seas.

Because of its location and visibility, the area was chosen by the Greeks to found a city there, centuries before the Trojan War. Apparently this was the land of the Phaeacians, a peaceful seafaring people described in the Odyssey; and it was here that Spartacus faced the legions of Crassus.

In 1640, a bronze tablet from the 2nd century BC was found here with the text of the Senatus consultum de Bacchanalibus, which laid down the ban on holding Bacchanalia (Bacchus cults).

To commemorate the supposed mythological origin of Tiriolo, a monument was erected in the 1980s dedicated to the Homeric hero, making him shine from the first light of dawn to the last light of dusk.

One of the figures on the monument is Bacchus, in memory of the Bacchanalia that were once held.

In Tiriolo you can visit the Parco Archeologico Urbano di Gianmartino, where excavations in 2014 brought to light the remains of a very well preserved monumental building consisting of a colonnade to which several rooms lead. Its purpose is uncertain, but it is assumed that it had a religious-sacred function, at least in part.

The discovery is exceptional both because of the state of preservation of the remains, which are still richly decorated (capitals, a mosaic with two dolphins that gives the palace its name, plastered and painted walls), and because of the numerous artefacts found: bronze and ceramic objects, Breton and Punic coins, female statuettes, etc.

In front of the Giammartino Archaeological Park, you can visit the civic Antiquarium, which exhibits the numerous artefacts found in the nearby excavation site - artefacts mainly of Breton origin, but also prehistoric and protohistoric as well as Roman. The museum also houses a copy of the famous bronze tablet engraved with the text of the decree by which the Roman Senate banned orgiastic rites and bacchanalia (Senatus consultum de Bacchanalibus).

One wing of the building that houses the Antiquarium houses the Museo del Costume Regionale (Regional Costume Museum), where no less than 36 handmade reproductions of costumes and two original costumes can be admired, an interesting collection from both an anthropological and craft point of view. Weaving is a very ancient art that has been preserved in Calabria over the centuries through the production of tapestries, lace, embroidery, silks, damasks and, especially in the Tiriolo area, the vancale: a woman’s shawl made of wool or silk and decorated with gold and silver inserts.

For more information on times and tickets, visit LINK.

Do not miss the tagliatelle with chicken liver at the historic Due Mari restaurant, located at one of the highest points in the city. It was opened in the 1950s by Peppino U’ Ciancio, a partisan and former miner. Since then, the spaghetti (rather tagliatelle) with chicken liver and “pollo alla diavola” have always been on the menu.

In the municipality of Decollatura, Carmine and Mario Gigliotti have founded Ortocorto, an organic farming project whose aim is to bring a breath of fresh air to traditional local production.

The nearest location that can be reached by bus is Contrada Pasqualazzo, starting from the city of Catanzaro. 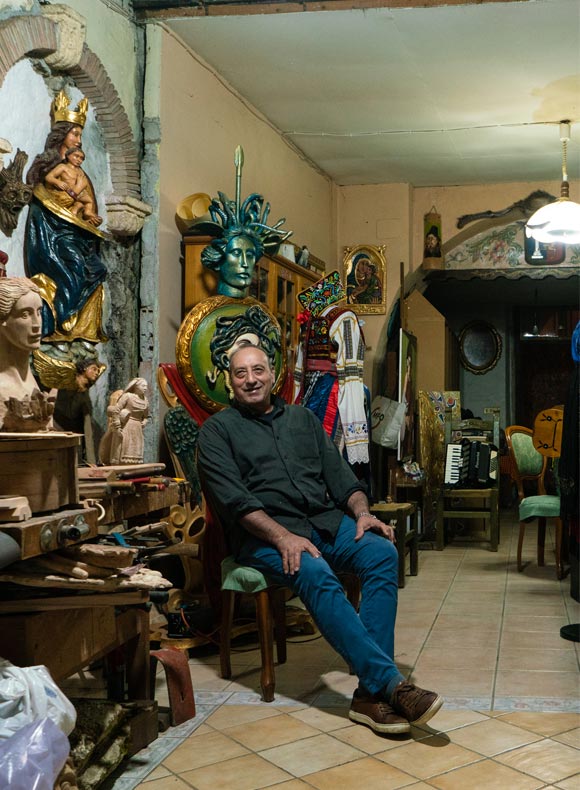 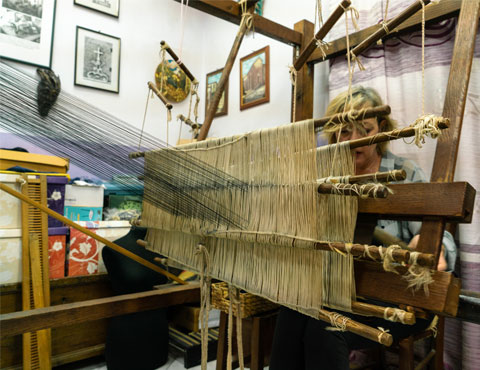