A very intense stage in terms of the differences in altitude and the type of terrain (in the second part).

The effort is rewarded by the incredible landscape of the Valle del Bove, with endless watercourses and lush plants that seem to have been borrowed from Hawaii.

REVIEW GPX TRACK, ESPECIALLY AT THE CROSSINGS WITH TURNERS IN THE PT AND ON THE RISE ALONG THE BEECH CANAL

Do not let the short length fool you: the stage is demanding in terms of intensity and difference in altitude, which should not be underestimated.

The signposts are there, but they are not always obvious and you need to sharpen your eye.

The second part of the route, from Monte Zoccolaro, is on a path that is not always visible (you have to guess), on sandy and slippery ground. Some sections are particularly steep and slightly exposed; sometimes help with your hands is needed.

No water points, take a good supply with you.

We leave Zafferana Etnea and begin the long climb (about 1,100 m height difference) to Monte Zoccolaro on secondary roads. After a few kilometres, we turn right onto a dirt road. For a few hundred metres it continues level, then a steep climb begins on a wide, well-marked path protected by the woods, which goes over some hairpin bends of the asphalt road. We pass some centuries-old beech trees; not far away, some viewpoints offer us a view of the Valle del Bove below.

With a firm but steady climb, we reach Monte Zoccolaro (1,739 m): the view is magnificent, with the summit of the volcano above us. Eyes shining, we continue walking along the ridge, first losing altitude to move up and down a narrow path that is no longer very clear. Then, without letting ourselves be distracted by the incredible panorama (but we must enjoy it, it is unrepeatable), we tackle the climb along the Canalone dei Faggi (about 150 m height difference): the gradient increases considerably, the sandy ground is quite slippery and the path has to be guessed; sometimes we have to use our hands in the more difficult passages.

After this climb, we tackle a second one (about 150 m height difference) that is much gentler and leads to the Serra del Salifizio; at the top we find photovoltaic panels and a webcam. We continue on the flat, then detach from the ridge and descend comfortably on a wide path (about 200 m drop) until we reach the asphalt road; slightly uphill we reach the historic Rifugio Sapienza.

The Rifugio Sapienza is one of the symbols of mountaineering on Etna and, together with the Capanna Margherita, one of the few refuges designated as a national monument.

II It was designed during Fascism, but built only after the World War by the CAI. It is dedicated to Giovannino Sapienza, a member of the Catania Section. Located in the municipality of Nicolosi, the refuge is a ski base and, unlike the facilities that have been destroyed several times by eruptions, it has been spared by the rivers, which have washed over it several times but never devastated it.

Etna’s magical phenomenon is the “contessa dei venti” (“wind countess”): the circles of clouds that form around the volcano.

The orographic waves create atmospheric phenomena of absolute fascination: the humid currents that rise around the summit of Etna form peculiar ring-shaped clouds that look like a hat. They occur most frequently in autumn and winter, when the Atlantic currents make the area wetter. According to folklore, the appearance of the hat indicates a change in weather conditions, probably due to the arrival of Atlantic disturbances.

A traditional Sicilian symbol is the cart.

This horse-drawn means of transport was in use throughout the region until the advent of motorisation and became a symbol of local folklore thanks to the numerous and extravagant decorations, whose content and style varied from province to province and were inspired by chivalric, religious and mythological themes. The styles were most widespread in the areas of Palermo and Catania, while those of the province of Trapani were less common. Although no longer used as a means of transport, the Sicilian cart, now a strong attraction for tourists, continues to be the protagonist of various urban representations.

According to mythology, the eruptions of Mount Etna are due to the puffs of the giant Tifeo (Typhoeus or Typhon).

After a battle with Zeus, the king of Olympus, who defeated him, the giant was dragged through the volcano until he finally landed under Sicily, with his arms towards Cape Peloro and Cape Passero (the two extreme ends of the eastern coast of Sicily), his feet in Lilibeo (Trapani) as if he were crucified, and his head directly under the mountain (‘a muntagna) - that’s what the locals call Etna.

Etna’s greatest attraction is certainly the Valle del Bove (also visible from the satellite), which some scholars believe was formed by the eruption of the primordial volcano Trifoglietto thousands of years ago. Seen from above, it is a piece of the volcanic cone that is missing, like a piece of cake removed with a shovel.

It is located in the “piece” of the volcano managed by the municipality of Zafferana Etnea and is a good five kilometres wide, with an area of 37 square kilometres. It is a desert area where the lava flows have continued to sink and where in places you can find Dagale (an Arabic term for small green islands where vegetation continues to live) surrounded by black, petrified lava. The rock formations, called “dicchi”, are numerous and intricate, creating a very impressive landscape.

Among the many Sicilian sweets are cassatelle di Agira, panzerotti with a filling of cocoa, chickpeas, almonds, cinnamon and lemon.

They are widespread throughout eastern Sicily and are made from shortcrust pastry in the shape of a crescent moon. Their origin lies in antiquity, some trace them back to the cuisine of the Spanish nobility.

They are typical of Modica and are said to have been invented by nuns to hide meat during Lent, although the name (very similar to Empanadas) hints at Spanish influences and the classic flavours of Hispanic America. There is also a pie version with aubergines instead of beef.

Caliceddi are delicious wild broccoletti that grow in vineyards and are typical of the foothills of Mount Etna, but are common throughout the Mediterranean.

With their bitter taste, they are the perfect accompaniment to sausage and other greasy dishes. They can be found from autumn to spring.

‍Rifugio-bivacco Galvarina, about 9 km after Rifugio Sapienza, on the next day’s stage (equipped with a fireplace, two benches and a table, mattress and sleeping bag required). Always open.

The starting point can be reached by bus, which leaves from the town of Catania. 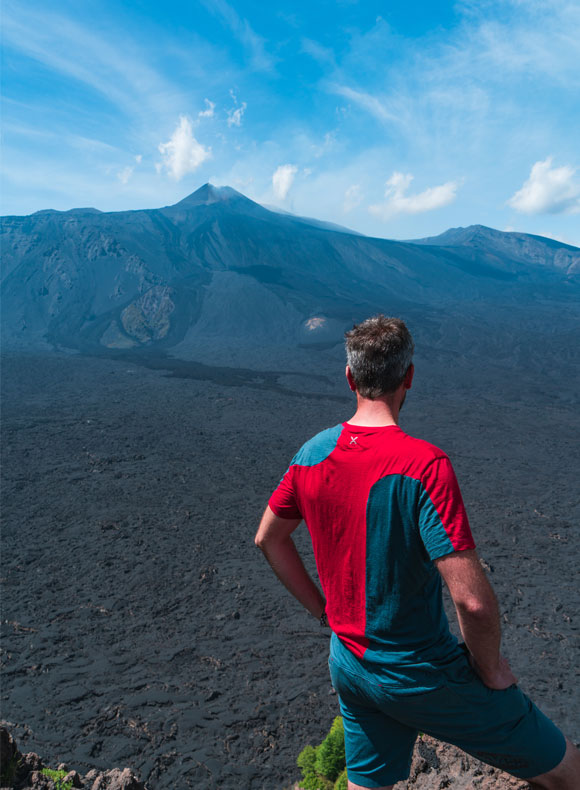 “The Valle del Bove sets our imagination free and we feel like we are in a novel by Jules Verne: Journey to the Centre of the Earth” 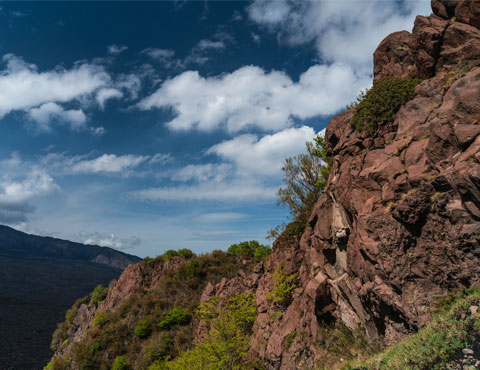