A very long stage (but with practically no climbs), with which we complete the circumnavigation of Etna by riding along its eastern slope, amidst the usual glimpses of lava and forest.

The stage is decidedly long, though without difficulties or positive altitude changes; the less trained can break it at the Rifugio Monte Scavo (a bivouac that is always open).

There are no water points (the water in the fountains of the bivouacs along the way is not drinkable): take a good supply with you.

We leave the plateau of the Rifugio Sapienza on an asphalt road, cut hairpin bends on tracks in the sand and lose height (about 100 m drop). Then we turn right onto a wide black sand road and follow it for several kilometres in a north-north-westerly direction, slightly up and down, through pine forests and old lava flows. We pass the Rifugio-Bivacco Galvarina and shortly afterwards another very similar structure. Then we reach the  Rifugio Monte Scavo (very similar to the previous two), where the tired can break the stage.

From the refuge we cross the great stream of 1832 and then enter the vast beech and oak wood that leads to Monte Spagnolo on a gentle descent (about 250 m drop). Having reached its foot, we turn left and begin the steep descent towards Randazzo (about 700 m drop). After a little more than a kilometre, we pass a gap to the right of a gate and leave the road along a wide path strewn with lava pebbles (be careful of your ankles!). We then reach an asphalt road where we turn right and follow it for the last kilometres to the town of Randazzo.

Randazzo, also known as the “city of the three parks” (Nebrodi, Etna and Alcantara), celebrates the feast of the Madonna Assunta on 15 August with the procession of the Vara: a large triumphal cart, of 16th-century origin, that carries the Virgin in triumph.

The cart is almost 20 metres high and is characterised by several superimposed planes that rotate around the central axis and on which 30 girls and boys play the roles of the Madonna and other saints.

The tradition, which dates back to Aragonese times, recalls the festivity of the Vara of Messina.

Randazzo’s contemporary history is marked by some tragic events, such as the massacre of 25 July 1920: numerous commoners went to the Town Hall to protest against the grain shortage that affected the poorest most; there were scuffles and the Carabinieri fired on the defenceless crowd, killing 11 people.

In 1945, in the locality of Murazzo Rutto, three protagonists of Sicilian independence (members of the EVIS, the Volunteer Army for the Independence of Sicily) were killed by a patrol of Carabinieri, in what is remembered as “the Randazzo massacre”. Among the victims was Antonio Canepa, a partisan who sided against fascism from the very first hour and who, after the war, preached the independence of the island with his “La Sicilia ai Siciliani”.

On 17 March 1981, one of the strongest eruptions of Etna in recent centuries began, commonly remembered as the “eruption of Randazzo”: the incandescent magma invested a large part of the municipal territory, cutting the route of State Road 120, the provincial road towards Mojo Alcantara and the Circumetnea railway.

The flow reached 2 kilometres from the village of Randazzo, as far as the southern slope of the Alcantara river, where it stopped after travelling a good 7.5 km. From 17 to 23 March, there was a succession of earthquakes and eruptions that deeply shocked the local population.

In the municipality of Bronte is the Castle of Nelson, the famous English admiral who defeated Napoleon at the Battle of Waterloo and became the first Duke of Bronte.

Situated on the left bank of the Saraceno stream, it is now a museum. The structure dates back to the 12th century: a Benedictine abbey was built, which was later transformed into a monastery with an attached defence tower and became a landmark for the entire area. At the end of the 18th century, the abbey was shaken by a severe earthquake and the original structure was altered during reconstruction.

In 1799, King Ferdinand IV of Bourbon donated the entire complex to British Admiral Horatio Nelson as a reward for the intervention of the British Navy during the Neapolitan Revolution, which was crucial to the Bourbon restoration. The complex, enriched by a vast park and two magnificent English-style courtyards and the Duke of Bronte's flats, houses the study centre of the old granaries.

Not far from Randazzo is Lago di Gurrida, one of the rare wetlands in the Etna Park, created after an eruption dammed the course of the torrent Flascio, which flooded the plateau and formed the lake.

In recent decades, an artificial reservoir has been created, reducing the surface of the lake and allowing the planting of some vineyards. When the snow melts, the lake floods the vineyards and offers an unusual spectacle.

The most important church in Randazzo is certainly the basilica minore di Santa Maria Assunta in Norman-Gothic style, characterised by black lava stone from the 1217 lava flow.

The building dates from the 13th century, while the 15th century portals are from the Aragonese period. The interior has the shape of a Latin cross and is divided into three naves. The central nave is decorated with a cycle of paintings from 1682 inspired by the life of the Blessed Virgin. Around the church, the Fiera Franca, which precedes and follows the Feast of the Vara, has been held since 1476. During the last war, the village of Randazzo was razed to the ground, while the basilica was only slightly damaged.

Randazzo is home to the Casa della Musica e della Liuteria (House of Music and Violin Making), a meeting place for crafts and music in the Sicilian tradition. More than 60 musical instruments, ranging from prehistoric times to the Middle Ages, have been made by violin maker Giuseppe Severini, who is always available for visitors to listen to the sounds of the various instruments.

A living workshop where the ancient art of violin making is interwoven with the manual techniques of the different cultures that have shaped Sicily.

Maletto, not far from Randazzo, is the town of strawberries, which in June are the protagonists of a festival for which the local confectioners get together and make a huge strawberry cake (over a thousand kilos) to offer to all who attend.

The fruit makes up a good part of the local agricultural economy.

The legendary Pistachio of Bronte grows on the slopes of Mount Etna.

Production of the famous fruit is traced back to Arab times (although it is thought that the Romans were the first to introduce it), when much was done for the agricultural development of Sicily - even today many words related to agriculture are of Arab origin, such as gebbia, the water cistern, or saja, the irrigation canal. The entire Bronte area is characterised by pistachio groves that climb the lava rock. The great resource of the area is the Terebinto, a plant from the same family as the pistachio, whose roots can penetrate deep into the volcanic soil and on which the pistachio is therefore grafted. The pistachio is a dioecious plant, i.e. there are specimens with female reproductive organs and others with male organs.

Reproduction of the pistachio is mechanical, i.e. by wind (and not biological, by bees): this is why the male specimens are usually grown in an elevated area compared to the females, at a ratio of one to ten to fifteen.

Another salient feature of this fruit is that it is harvested every two years: this not only follows the natural rhythm of the plants, but also serves to keep the reproduction of an insect that spoils the fruit in check.

Typical of Randazzo are the frollini al pistacchio (pistachio shortcakes) that you can find in Giovanna Musmeci’s exceptional pastry shop.

Founded by her father Santo, the pastry shop is known for its excellent ice creams and granitas, especially the pistachio granita with its almost crunchy texture. The pastry shop has won numerous awards worldwide; Giovanna was even named “Ambassador of Sicilian Granita to the World”.

Randazzo has always been a land of wines; in recent decades it has become, along with the entire Etna area, a paradise for natural wines.

One of the first to dedicate himself to viticulture was Davide Bentivegna, who, after years of working as a manager in Milan, decided to return to his homeland and produce wine at his cantina Etnella (Etnella winery).

The nearest location that can be reached by bus is Nicolisi, starting from the city of Catania. 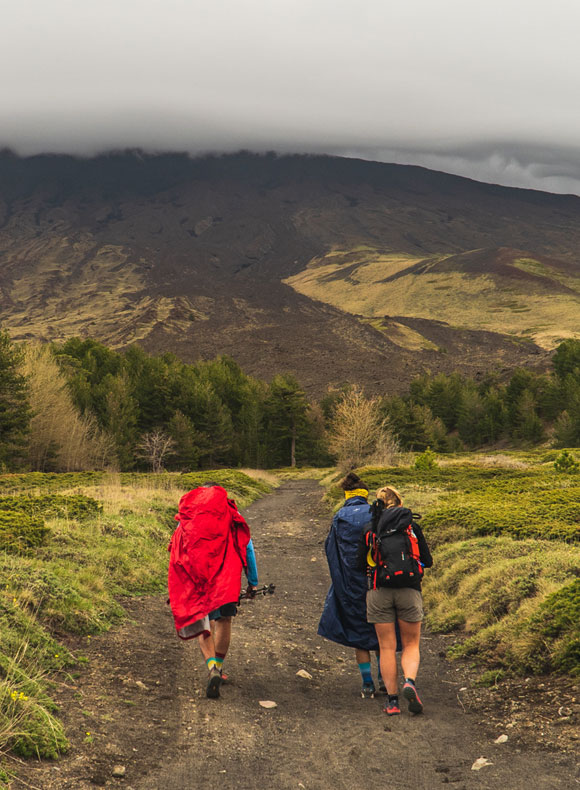 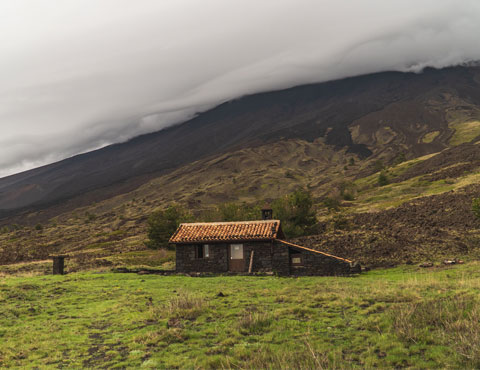