A medium-length stage with important differences in height that offers some satisfying views.

We leave the Agriturismo Il Riccio and, upon reaching the asphalted road, we take it to the left and slightly climb, on asphalt, towards the Monticchio lakes. After the Lago Grande, we pass on the path and skirt the south shore of the Lago Piccolo; we continue on the circular route arriving at the steps leading to the abbey of San Michele Arcangelo. We keep to the right and, instead of aiming for the abbey (unless we want to visit it), we continue towards the south inside a beech forest, on a wide path that slowly climbs (approximately 150 m height difference) until we reach an asphalted road.

We keep left and, after about 100 m, again to the left passing on a carriage road; we begin the long climb (approximately 450 m height difference) towards the Vulture. We cross first a pine forest, then we pass among the oaks; after a short ramp, being careful to follow the right direction at the crossroads that we meet, we continue along the hillside on the western side of Monte San Michele (1,262 m). We come to a panoramic point characterized by the presence of some old tables, overlooking the underlying Monticchio Lakes. We continue on the carriage road, inside a beech forest, until we enter the paved road and with that, we go around the top of the Vulture (1,326 m - it is a military area and therefore not explorable).

At a large crossroads, with several signs and tables, we take the path behind the signs, clearly visible, and we start the long descent (approx. 700 m drop) soon passing on a carriage road, in the chestnut woods (in October it is necessary to stay on the path, the chestnut groves are private). Once on the state road, we cross it and, back on asphalt, we descend a little more to Rapolla.

Monte Vulture, located in the center of the peninsula, dominates the northern panorama of Basilicata. It is an extinct volcano with an anomalous position, as it is located on the eastern side of the Apennines - all other volcanoes are located on the Tyrrhenian side. Its shape has been modified by tectonic processes: there have been numerous earthquakes that over the centuries have created wide valleys and deep gorges.

The Vulture area is rich in natural springs (including sparkling waters) and there are numerous water bottling plants.

The volcanic soil is particularly fertile and the mountain is covered with dense vegetation (numerous chestnut groves); for this, it is also called the green volcano.

Unfortunately, the top of the mountain (1,326 m) cannot be reached as it is a military area, impassable.

In 2017, the Parco Naturale del Vulture was established to protect this splendid ecosystem - in particular the very rare European owl moth, a nocturnal butterfly whose caterpillars grow in the southern ash, abundant in this area.

For more info on the Park, see the following LINK.

The Monticchio Lakes, at the foot of the Vulture, are a natural spectacle to be enjoyed in all seasons of the year.

The two lakes, remains of the ancient crater of the Vulture volcano, are positioned at different heights: the smaller one, at the top, is fed by underground springs that flow into the larger one, below. The lakes also have different colors - greenish the small, more olive the large one; during winter, the small lake turns red due to the presence of ferrous water that rises to the surface.

To preserve the natural environment, the Riserva Regionale Lago Piccolo di Monticchio was established in 1984. In the Reserve is present, and protected, the European owl moth, a beautiful moth with a wingspan of about seven centimeters.

Among the Monticchio lakes, you can admire the ruins of the Abbey of Sant'Ippolito, an ancient monastic complex founded in the 9th century by the Basilians, followers of the rule of St. Basil, that were fleeing from the East due to the iconoclastic fury of the Byzantine emperor Leo III Isaurian.

The ancient monastery was replaced by a Benedictine abbey destroyed by the earthquake of 1456. The abbey guaranteed assistance and hospitality to pilgrims who went to visit the Cave of the Archangel Michael.

A huge white building, built close to the rock, standing out on the stretch of water of Lago Piccolo di Monticchio: it is the Abbey of San Michele Arcangelo, whose construction dates back to the 8th century, around a cave initially used as a place of worship by the Basilian monks. Modified and restored several times, the Abbey passed from the Benedictines to the Capuchins to the Constantinian military order, gradually enlarged thanks to the overlapping and integration of natural elements and human interventions, achieving a very suggestive result.

Inside the Abbey, there is the Museo di storia naturale del Vulture, which tells the story of the Vulture Volcano and the prehistoric man who inhabited the area.

The Vulture area is renowned for its wine production: one name above all is Aglianico del Vulture.

In Rapolla, arranged side by side along the ridge of the valley, there are numerous underground cellars that make up the Parco Urbano delle Cantine, where numerous food and wine events take place held in October. The caves-cellars, dug into the volcanic rock, are also present in the municipality of Barile, in the Sheshë hilly massif. The hundreds of caves present were the suggestive scenery of the Gospel According to St. Matthew by Pier Paolo Pasolini.

Aglianico del Vulture (Controlled Designation of Origin) is one of the best Italian red wines; considered the Barolo of Southern Italy, its production is allowed only on the slopes of the mountain of the same name.

It is believed that it was brought to southern Italy by the Greeks between the 7th and 6th centuries BC and the Romans defined the grape variety vitis Ellenica. Already in ancient times, it had great fame and it is said that, after the battle of Canne, Hannibal sent his soldiers to "cure" themselves with the red wine of Vulture. The Angevins called it vino rubeo Melfie and finally the Aragonese called it Aglianico.

It is a red wine with great structure and intensity, with an intense black color, excellent to pair game or spicy dishes.

The Vulture area also enjoys another excellent product that bears its name: the Vulture oil, with a tomato scent and a sweet taste with bitter and spicy notes.

A typical dish of the Arbëreshë culture of Barile are the tumacë metulë: handmade noodles seasoned with tomato, garlic, parsley, anchovies and the addition of fried breadcrumbs and walnuts.

In Rapolla there are several accommodation facilities.

The nearest town reachable by bus is San Giorgio di Melfi, starting from the city of Melfi. 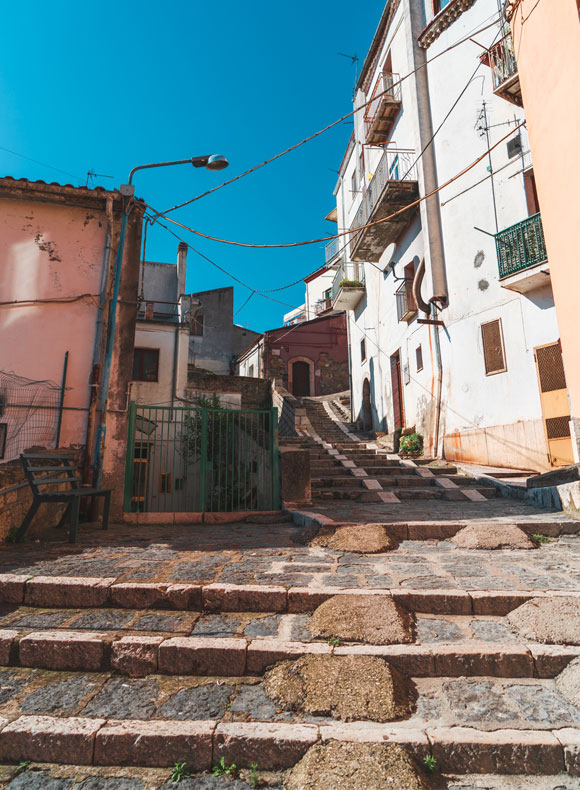 “The houses of Rapolla shine colorful under the Apulian sun” 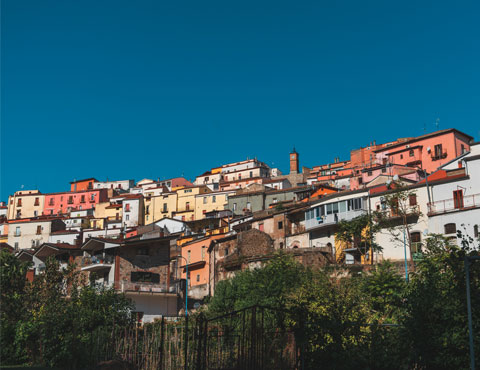