A short stage of medium height and without difficulty, through which we move to the northern side of Monte Vulture, passing through a beautiful chestnut wood.

The route represents a variant of the Sentiero Italia (that from Melfi points directly to Venosa), preferred for the landscape interest of the Monticchio and Monte Vulture lakes.

Along the way, you can meet stray dogs, generally tame: better be careful.

We leave Melfi from Porta Venosina, walking on the sidewalk by the asphalted road and passing the railway station. After the railway, we continue on asphalt and start the slow climb (approx. 500 m height difference) towards Femmina Morta. Where the road gives way to a carriage road, we find ourselves inside a well-kept chestnut grove.

Once in the locality of Femmina Morta (we find satellite antennas), we pass a barbed wire fence and take the cart track to the right; the panorama opens and we admire the Vulture and the Lucanian mountains. We start to descend (approximately 500 m drop), with sometimes an important slope (totake into consideration, in case of rain).

When we reach the first houses of San Giorgio di Melfi, we take the asphalted road to the left and continue to descend to Monticchio Bagni, passing the Acqua Gaudianello plant in the meantime. We continue on the asphalted road, going up (approximately 150 m height difference) to the Agriturismo Il Riccio.

In the second half of the 19th century the Monticchio estate became the property of the Lanari family from the Marche, who practiced a real colonization of the Vulture area, bringing numerous families from the Marche, offering them a large farmhouse with stable, warehouse, and fields to cultivate.

It was established as a sort of self-sufficient colony, with all the services and over the years it was transformed into an industrious production area. It faced the last remnants of post-unitary brigandage and brought a strong innovation in agriculture and animal husbandry: many of the chestnut trees we find today on the Vulture were wanted by the Lanari family, as well as the commercialization of the waters.

During the Nazi occupation, the Nazis killed 18 Rioneresi in cold blood: the episode is remembered as the  massacre of Rionero.

The retreating Germans destroyed the food supplies so that they did not fall into the hands of the Allies. For this reason, the population stormed the town's warehouses, thus provoking the violent reaction of the Germans, who rounded up and killed 18 civilians; only one of those arrested survived as he was believed dead, while he was passed out among the corpses of his fellow villagers.

The area of Monte Vulture was affected by the phenomenon of post-unitary banditry: it was a strategic point, a safe place to hide and control the territory.

Rionero was the birthplace of one of the most famous brigands in the Center-South, Carmine Crocco. After ending up in prison for killing a squire who bothered his sister, he participated in the Garibaldi Expedition of the Thousand in exchange for the promise of amnesty. When the Kingdom of the Two Sicilies fell, the promise was not kept. With the help of pro-Bourbon nobles, Crocco managed to escape ... thus the so-called legend of the Napoleon of the Brigands was born.

He was at the head of an army of 2,000 brigands (propertyless, ex-soldiers of the Bourbon army) and, thanks to the experience gained on the battlefield and a marked intelligence, he proved to be a skilled and feared leader. The popular consensus he enjoyed was strong and soon, this allowed him to firmly control the Vulture, Irpinia, and Capitanata area, declaring the Savoy authority decayed. The occupation of Melfi worried greatly the Kingdom of Italy and Garibaldi himself mentioned it during a parliamentary interpellation.

Over time, however, the Savoy army became stronger, some comrades betrayed him and so it happened that, after years of success, the adventurous and controversial life of the brigand Crocco ended in the Portoferraio prison, on the Island of Elba. Sentenced to death, the sentence was eventually converted to life imprisonment.

Between the municipalities of Atella and Rionero, there is the archaeological complex of Torre degli Embrici, a very large and important Roman villa that survived as a farm until the 13th century. The findings in this area, on the other hand, are surprising: the first settlements date back to the Lucanians of the 4th century BC.

In the hamlet of Monticchio Bagni there is the Gaudianello plant, a sparkling water defined by some as the “champagne” of mineral waters.

Its quality was also certified by Altroconsumo in 2005, as the best of all natural sparkling waters. Gaudianello sells both still water, called leggera, and sparkling water; there is also a third type of water, the ferrous one which is not on the market, but can be drunk from local fountains.

One of the typical first course is the strascinati, a pasta whose length depends on the fingers used to stretch them (usually two or three); the perfect match is with the traditional peperone crusco ammollicato.

The Cruschi peppers are the gastronomic symbol of Basilicata.

These are the typical peppers of Senise, left to dry to be eaten as a snack, blanched in oil to increase their crunchiness, or ammollicati (soaked) to enrich the dishes. They are also called the red gold of Basilicata.

The baccalà (cod) alla traniera (called in this way because it is "trainato" (pulled), like the mules) is part of the Lucanian tradition: it was one of the few fish that could be preserved in these areas.

It is served with crusco pepper and garlic oil.

Starting point reachable by bus from the city of Foggia, with a change in Carapelle.

Starting point reachable by train from the city of Foggia. 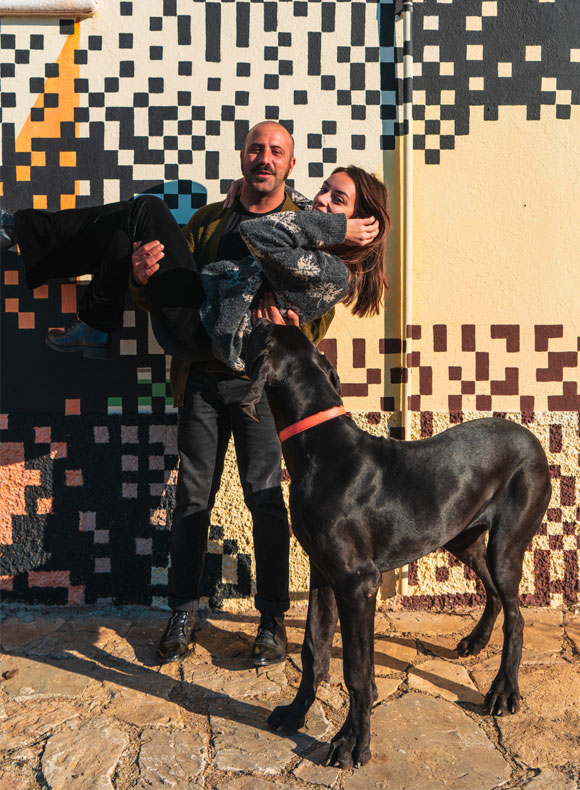 “Stefania and Antonio welcomed us on the slopes of the Vulture, making us feel at home” 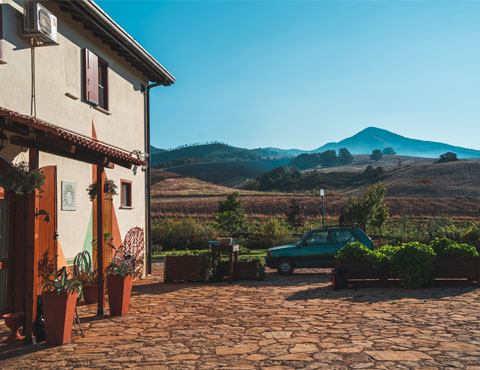