A stage of good length, with an initial climb that leads to a beautiful panoramic view of the village of Rivello.

After the first part in Campania, we enter a new region: Basilicata.

The first part of the stage is a long climb, even though there are no major climbs; it is best to tackle it without haste.

After leaving Fortino, we follow the asphalt road for a short while, then turn right and take a dirt track where we tackle the first long climb (about 300 m height difference) through a wood that cheers us up with its shade (it is easy to see some cows grazing). The path is well marked and there are some shepherd’s gates to overcome.

We continue to gain height between the trees and finally come out on the top of the pass (we are just over 1,000 m above sea level), from where we have a very nice view of the village of Rivello and the mountains behind it.

After filling our eyes and catching our breath, the descent is quite steep (about 400 m drop) until we reach and cross the small, very pretty village of Rotale. We continue slightly downhill until we reach a regional road, which you follow to the right for a few hundred metres, then turn left onto a small road (which soon becomes a dirt track) and start to climb again (about 200 m height difference) into the woods; after reaching Puglio, we descend slightly (about 300 m drop) and reach the main road, enjoying the view of the village of Rivello that lies ahead on the opposite side of the valley. After crossing the road, a new descent awaits (about 150 m drop), short but intense, to the Noce, where, faced with the last climb (about 100 m height difference), we can refresh ourselves on the steps that lead us to the heart of the beautiful village, made up of narrow alleys and traditional houses.

The village of Rivello stretches over a small ridge made up of three hills, in a labyrinthine maze of narrow streets, stairways and small squares.

It was built on the Lucanian town of Sirinos and owes its name to the ancient city of Velia: Rivello stands for Re-Velia (the town's coat of arms bears the Latin inscription Iterum Velia Rennovata Rivellum). It was founded by the Lombards and Byzantines fleeing the Saracen invasions. The settlement led to a strange coexistence between the two peoples, who lived close to each other and yet separately: each had its own church (San Nicola for the Lombards and Santa Maria del Poggio, Greek rite, for the Byzantines) and its own fountain.

In the village of Rivello, the municipality organises the Polifonié Music Festival in August. The concerts take place in the most evocative locations in the village, for example near the monastery of Sant'Antonio Abate.

The landmark of Rivello is the Monastery of St Anthony of Padua.

It was built in 1515 and was an important cultural centre for the area, also thanks to its rich library. It is located in the lower part of the town and is characterised by its square cloister, numerous paintings and frescoes from the 16th century. Particularly noteworthy are the paintings attributed to Giovanni Todisco da Abriola (16th century), including the majestic Last Supper in the refectory (1559).

The monastery was closed and suppressed during the Napoleonic laws, but remained inhabited by the friars until 1889. Today, the upper floor houses the archaeological exhibition “Noce e Lao tra greci e indigeni” (Noce and Lao between Greeks and natives), which shows the relationship between the inhabitants of the inland areas and the cities of Magna Graecia.

There are two other important churches in the village: the Church Madre of San Nicola and the Church of Santa Maria del Poggio.

The former was built on the ruins of an ancient castle and houses the crypt of San Nicola; the entrance is adorned by an 18th century staircase. On the opposite side of the village, the second, dating from the 18th century, stands on the top of a hill - a position that makes it resemble a fortress. It was built by the Byzantines and was the church where the Greek rite was celebrated. The interior, remodelled in the 18th century, is decorated in the Baroque style, with the Neapolitan Rococo organ standing out.

In the alleys of the village is Clementina’s small grocery shop, where you can eat the typical Lucan taralli (in the shape of a figure eight) to go with lucanica - the name the Romans used for the sausage in reference to Lucania. There is always Meneghina, a very friendly and energetic lady, always ready to brighten up the moments with her accordion.

Typical of the Christmas season are the zeppole cresciute, made with a mixture of flour and water that is left to rise and then deep-fried. They are garnished with sugar and honey.

Laghenelle are the typical type of pasta and are traditionally cooked with beans sautéed with garlic and oil. The recipe is called laghene e fasule sfritte.

The nearest location that can be reached by bus is Lagonegro, changing at Maratea, starting from the city of Sapri. 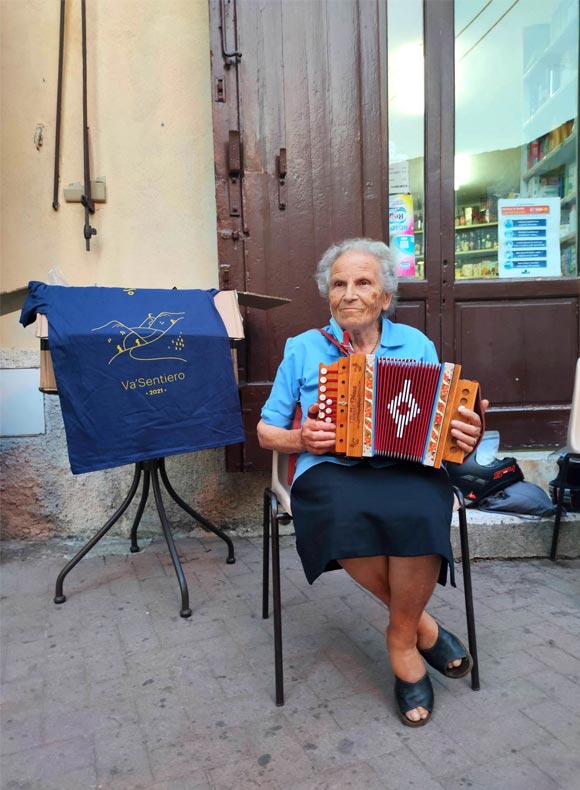 “Meneghina is a monument in the village. Late at night we find her still awake with her faithful accordion: we sing with her into the sunrise”. 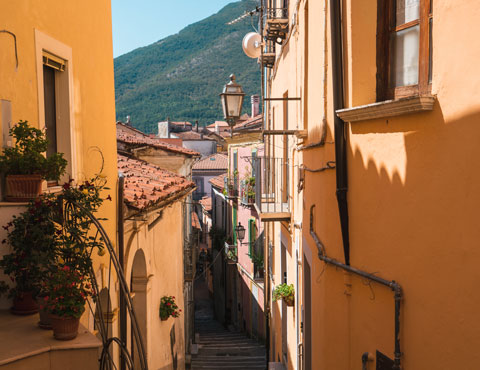