A stage of good length but practically devoid of climbs.

Despite the absence of noteworthy views, it offers the encounter with the Tirino river, one of the clearest in Italy, and the discovery of the historic center of Popoli.

The signage is intermittent; better to keep an eye on the GPS track.

We leave Ofena on a small asphalted road; after a first stretch in ups and downs (note the figurative votive niches on the left side of the road), we take the wide path on the right and we slowly descend (approximately 150 m drop) towards the plateau of the Valle del Tirino. After passing a group of dilapidated houses, we reach an asphalted road, which we take to the right; shortly after, we turn left onto the dirt road and continue on level.

After passing Lago di Capodacqua (from which it originates the Tirino river), we continue for a long time on a wide open road, without any difficulty. After a few kilometers, we turn right in a short descent to bring us closer to the Tirino river and follow its course along a small asphalted road. At a bend in the river, we find a picnic area, ideal for a stop and a cooling bath. We continue on the road for a long time, until we cross the center of Bussi sul Tirino; once on the opposite side of the river, we pass under the freeway and immediately after we take the dirt road on the right which goes up (approx. 100 m height difference) the side of a hill.

After having crossed it, we proceed on an easy descent (approximately 200 m drop); we cross an asphalted road and take the path that cuts a wide bend, until we return to the asphalt road and, passing the hospital, enter the Abruzzo town of Popoli.

An illustrious citizen of Popoli was Corradino D'Ascanio (1891-1981), inventor of the helicopter and... of the Vespa!

Little more than a child, he had a pair of large wings built by the town's blacksmith and tried to make a kind of glider using bed sheets, newspapers and wood for his first flight attempts. His profound passion led him to look for the crux in nature to win the challenge with gravity - as taught today by the biomimicry, a discipline that studies processes, models and elements of nature in order to draw inspiration from them to improve activities and human technologies.

The flight of D'Ascanio's helicopter is inspired by the maple's samaras that fall twirling and the flight of dragonflies, numerous in this area rich in water: it can be said that the helicopter is the result of the wonderful natural landscape of Popoli .

The Vespa, today Italy's symbol in the world, was born precisely from the adaptation of the engine for the helicopter. D'Ascanio was forced to produce something saleable for Piaggio, but he never loved his invention and his dream continued to be to fly higher and higher. He often said: "To me, the Vespa stung me. I cannot stand it anymore!"

Popoli is also known as the city of waters: the Pescara, Aterno, Giardino and San Callisto rivers flow in the municipal area. 7,000 liters of water per second come out of the springs of Pescara and this enormous flow means that the Aterno, even with a much longer course preceding it, it is considered one of its tributaries.

In Popoli this resource is fully exploited, from water bottling to hydroelectric power plants.

The city of Popoli is located in the Conca Peligna. The name of this valley originates from the ancient Italic population that inhabited the area: the Peligni.

An Osco-Umbrian speaking population, it was part of the Italic League that opposed the Roman Republic during the Social War (1st century BC), fighting to obtain Roman citizenship. In Corfino, capital of the Peligni, to sign the agreement were printed coins with a female head and the inscription Italy: among the oldest finds that bear the current name of the peninsula.

Some scholars believe that the name Italy derives from the term italós, "bull" in Etruscan: the animal, sacred to the Samnites, is depicted on the other side of the aforementioned coin while killing the she-wolf.

The city of Bussi sul Tirino has been an important area for the chemical industry since the beginning of the 20th century. Sadly known for the extraction of the minerals (mustard gas), used to produce the toxic gases used during the Italian colonial deed in Africa (in particular during the Abyssinian campaign), in the Fascist period.

The Pescara river’s springs are a real spectacle: crystalline water gushes from the underground springs, allowing you to admire the colorful aquatic vegetation - water celery, water rushes, duckweed, and much more. The springs are distinguishable on the bottom, as they are made of very white sand, devoid of surrounding vegetation, and often you can see large bubbles of oxygen come out; the water is so pure that you can drink it.

The suggestive landscape is one of the first environmental reserves of Abruzzo; established in 1986, it protects a biotype rich in lake animals, including many birds that inhabit the thick rushes.

The Tirino originates from the aquifer system of Campo Imperatore and, after an underground journey of about 25 km, flows to the surface in three points in the area between Capestrano and Bussi. It is renowned for its crystal clear waters.

In the Capodacqua area, where it generates a lake, on the bottom you can admire the ruins of numerous buildings that have earned it the nickname of Atlantis of Abruzzo.

In the ‘80s inside the Majella Park was established the Centro visite del Lupo to protect the wolf and above all to sensitize the local population to the possibility of coexistence. The center hosts animals that have been injured or cannot be returned to captivity: deer, fallow deer, wild boar and wolves.

In the depopulated historic center of Popoli, between the Chiesa della Santissima Trinità (16th century) and the Palazzo Ducale Cantelmo (15th century), there is the only bookshop of the town: the Libraio di Notte. Paolo Fiorucci decided to open his bookshop, which has become a meeting place where to breathe culture, to encourage the citizens of Popoli to keep reading.

Near Bussi there is the Chiesa di Santa Maria di Cartignano. At the beginning of the 20th century, the former Benedictine monastery became a national monument and in 1968 a restoration operation was carried out, keeping the ruin without the central cover. The charm of the ruins highlights the beautiful rose window on the facade.

The specialty of Popoli is the crayfish, once plentiful in the waters of the area In the ‘70s, in a very short time, crayfish almost completely became extinct due to a pathogen (probably introduced into the waterways following a fish restocking program) and the low genetic variability of the native crustacean.

In the past, crayfish were fished with the most imaginative baits, from lard to tuna, and were a rich source of income. There are still numerous recipes prepared in the restaurants in the area (Iranian shrimps are used), above all pasta with crayfish sauce.

In Popoli there are numerous accommodation facilities

Departure point reachable by bus from the city of L'Aquila, with a change in Capestrano. 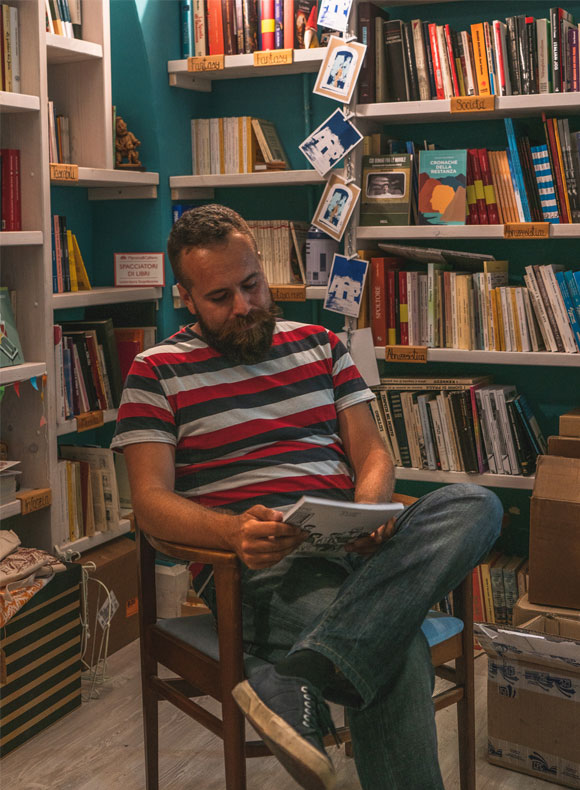 “Paolo and Savino welcome us to the Libraio di Notte, a place that seems to come out of Carofiglio's books” 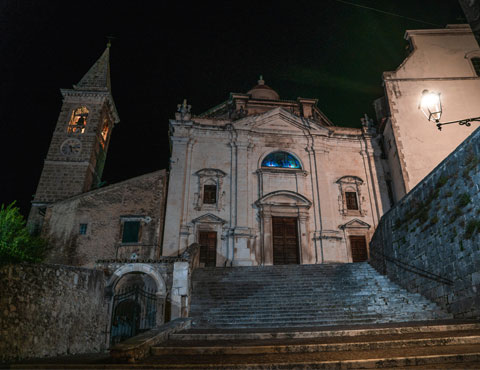