An easy stage with almost no climbs that takes place in the magical scenery of Campo Imperatore: we walk on boundless plains among landscapes of cinematic memory.

The highlight of the day is represented by the ruins of the abbey of Santa Maria del Monte.

The signs (both the signposts and the signs) are often missing and the track, in several sections, is buried by the vegetation: keep an eye on the GPS track.

For the entire duration of the route there is no shade, except among the ruins of the abbey of Santa Maria del Monte, shortly after Lago di Passaneta.

We leave Rifugio Duca degli Abruzzi and go down (approximately 250 m drop) on an easy path with hairpin bends to the astronomical observatory of Campo Imperatore. We cross the large parking lot and take a track, almost invisible, towards the south, barely losing altitude until we reach a cart track. Shortly after, at a crossroads, we keep to the right and begin the descent (approx. 300 m drop) on a good cross path up to Sella della Scindarella (1,814 m), where we take the dirt road to the left, arriving shortly at some large abandoned buildings. A short climb leads us to the asphalted road, which we cross to continue south, downhill (approximately 150 m drop), guessing the track in the tall grass.

Reached the valley floor, we turn left onto the wide flat path, passing Lago di Barisciano and, after a few kilometers, that of Passaneta. Immediately after, we notice just above, on our left, some ruins: they are those of the abbey of Santa Maria del Monte, which offer the only shadow of the stage. The scenery is spectacular: to the east the boundless plains of Prato del Bove, to the north the alpine forms of Monte Prena (2,561 m) and Monte Bandiera (2,564 m).

We leave the main path and take a cross path, on the right, going through Campo delle Ginestre; then we turn south and go down (about 200 m drop) until we reach a dirt road that runs along the slopes of Monte Tre Colli from the west. At the end of a short climb, we leave the dirt road and resume the path, on the right; to the east, we spot Rocca Calascio, where the film Ladyhawke was shot. Shortly after, the path descends (about 200 m drop) on a gravel ground to the lake that precedes the magnificent medieval village of Santo Stefano di Sessanio.

The beautiful village of Santo Stefano di Sessanio was founded in the first centuries of the year 1000, within the Baronia di Carapelle In the area, renowned for wool production, there were up to three million sheep that practiced transhumance (the seasonal migration of livestock) from Campo Imperatore to the Tavoliere delle Puglie.

The Baronia, located along the Via degli Abruzzi, connecting Florence to Naples, was purchased in the 15th century by the Sienese family of the Piccolomini d'Aragona and sold in 1579 to the Medici family, who were interested both in the wool trade and in the strategic position of the Barony within of the Kingdom of Naples.

Abruzzo, and in particular the Barony of Carapelle, was one of the most important pastoral basins in Italy. Sheep was a very valuable source of income and allowed this area to thrive for centuries and centuries.

With the annexation of the Kingdom of Naples to the Kingdom of Italy, the right of grazing in the Tavoliere delle Puglie was lost (already partially suppressed during the French occupation at the beginning of the 19th century): established in 1447 by Alfonso of Aragon, this right imposed the payment of a tax to the Royal Customs of the Mena delle Pecore located in Foggia.

The wool trade was one of the most important elements of the economic development of the Kingdom of Naples and the taxation on sheep farming constituted the greatest economic income of the kingdom.

Santo Stefano represents one of the most successful examples of recovery of an almost abandoned village. Restoration projects have followed one another since 1975, but the albergo diffuso Sextantio, built by the Italian-Swedish entrepreneur Daniele Kihlgren, certainly gave the fundamental impetus to the life of the village.

The cylindrical tower, improperly called medicea, was built in the 14th century and is the symbol of the municipality of Santo Stefano di Sessanio. Destroyed by the 2009 earthquake, also because of a bad renovation, it is currently under reconstruction; reopening to the public is scheduled for spring 2021.

Towards the Campo Imperatore plateau there are the ruins of the grangia circestense of Santa Maria del Monte. The grangia was the structure responsible for the subsistence of a monastic abbey: it was used as a shelter for cows or horses and for the production of dairy products or meat. The one in Santa Maria del Monte was particularly important for its proximity to Campo Imperatore and the tratturo Magno.

The village of Santo Stefano is a maze of alleys, including a particularly narrow one called la bucella: a bottleneck between the houses that was used as a control point for the access to the village. Formed by the adjacency of two houses that could not be approached due to the presence of rocky spurs, it has given rise to numerous legends: some indicate this corner as vico del bacio, others as a counting point for the sheep.

The Santo Stefano di Sessanio lentil is a mountain species that is grown between 1,200 and 1,400 m, characterized by its small size and dark color.

Rich in iron, it has a small production and today it is a Slow Food presidium.

The pecorino canestrato of Castel del Monte is produced in the nearby Castel Monte, another Slow Food presidium. The name canestrato derives from the original cheese container, made of intertwined brooms, which still today gives shape to the external surface.

The disciplinary regulation imposes that for its production  must be used only raw milk from sheep grazing in Campo Imperatore.

In Santo Stefano di Sessanio there are numerous accommodation facilities.

The nearest town that can be reached by car is Campo Imperatore.

The nearest place reachable by bus is Fiordigigli, starting from the city of L'Aquila. From there you can take the Gran Sasso cable car to Campo Imperatore. 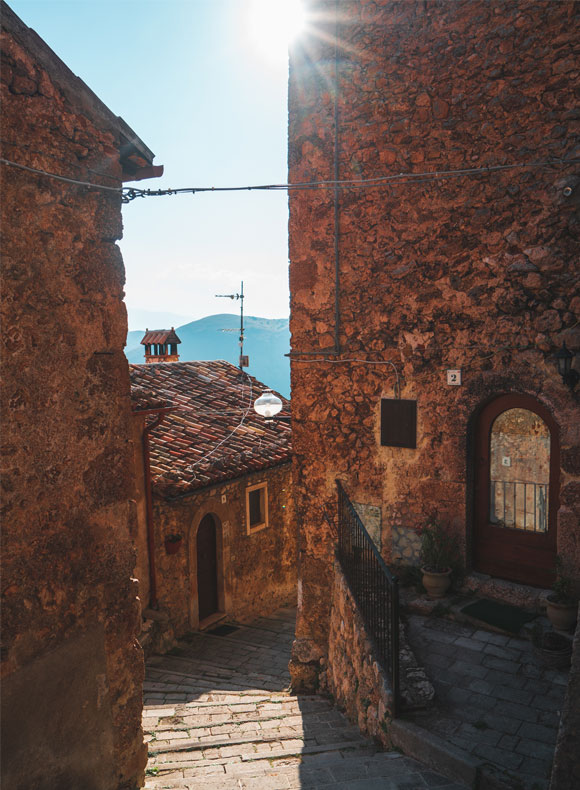 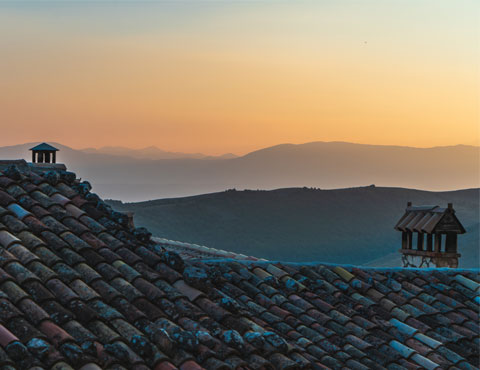