A stage of medium length and medium height difference but easy and regular, very smooth. The highlights of the day are the village of Celle San Vito, a Franco-Provençal linguistic island, and the beautiful Orsara di Puglia.

The initial section, up to Monte San Vito, represents a variant of the Sentiero Italia, preferred for the landscape interest of Monte Cornacchia, the highest in Puglia, and the cultural interest of the villages of Castelluccio Valmaggiore and Celle di San Vito.

No signs (only sporadic signposts): it is good to monitor the GPS track.

The ford of the Celone stream is not easy to identify, however it does not present any difficulties.

We leave the Rifugio Casonetto and retrace the last stretch of the previous stage, this time slightly uphill. Reached an asphalted road, we go down (approximately 150 m drop) to Castelluccio Valmaggiore, where it is worth visiting the Celone Museum.

On a dirt road, we go down again (approximately 100 m drop) until we reach the Celone river, which we ford (the fording point is difficult to spot immediately). We begin the climb (approx. 200 m height difference) towards Celle di San Vito: after a stretch in the woods on the path, we find a carriage road and go up until we reach an asphalted road, which we follow to the left cutting the hairpin bends on the path.

Leaving the village behind us, we continue the ascent on the dirt road towards Monte San Vito (1,015 m), surrounded by wind turbines, with an open view over the Adriatic Sea. We overcome a road, then we advance in easy ups and downs towards Monte Calvello (921 m), from where we walk on the ridge up to the easy descent (approximately 250 m drop) that leads us to Orsara di Puglia.

In the towns of Celle di San Vito and Faeto is spoken a dialect of Franco-Provençal origin, instead of the Dauno-Irpino dialect (in which the influences from Campania are strongly felt).

The origin of this curious speech is traced to the rise of Charles I of Anjou in Puglia: after forcing the Saracens to flee from Lucera, he tried to create a Provençal colony in the city. The attempt was, in fact, a failure: because of the unhealthy climate, the approximately one hundred families who moved from France preferred to emigrate to Valmaggiore .

Orsara was part of the Capitanata, a geographical area that extended into the territories of the current province of Foggia. The Capitanata was established in the 16th century as an administrative unit of the Kingdom of Sicily first and subsequently of the Kingdom of Naples and of the Two Sicilies. It is believed that the name derives from the period of Byzantine domination, during which the administration was entrusted to government officials, called Catapani.

The area, which had Lucera as its capital, experienced a long period of prosperity and was disputed throughout the medieval period as a fundamental hub for the trade between the two shores of the Adriatic. Harassed by the Angevin domination, which exploited its wealth with heavy taxes, it was redefined with the arrival of Giuseppe Bonaparte who remodeled the administrative structure by suppressing the feudal system.

On Halloween night, the village of Orsara is filled with pumpkins; however, it is not the famous Anglo-Saxon festival that is celebrated but the feast of Fucacoste instead, a local tradition that celebrates the spirit of the dead.

It is an ancient recurrence, perhaps of Galician origin, during which on the night of the dead, blessed candles are lit in front of the houses, placed inside the pumpkins carved with the symbol of the cross, to ward off the damned souls. At the stroke of midnight, the time of the dead begins: everyone returns to their home and the procession of the Archconfraternity of the dead begins. The participants, dressed in black and hooded, knock on the doors of the town asking for food for the poor.

After the procession, at 3 am they return to the Church of Santa Maria delle Grazie to celebrate the Messa Nera, Black Mass (so called for the color of the vestments). Traditionally, pumpkins (cocce priatorje) symbolize the souls of the dead and broom fires (fuoc acost, scattered fires) are scattered around the town to console them.

There are many occasions for celebration and conviviality in the town of Orsara: the Festival di Fine Confine celebrates the mixed identity of these places, on the border with Campania (Orsara was part of the province of Avellino until 1927); in the municipality of Montaguto, the Grigliata Letteraria takes place, you can refresh your body and mind; in addition, the Orsara Jazz Festival animates since 1990 the summer of the village with many concerts and seminars.

The Church of Santa Maria Annunziata is an imposing building on the edge of a deep canal, built in the 9th century above the cave dedicated to the Archangel Michael.

Some believe that the church was placed above the cave to fight the heresy of Cerinthus of Antioca, who claimed it was angels who created the world. Under the church, it is still possible to visit the cave carved into the rock, a replica of the famous cave of Monte Sant'Angelo on the Gargano.

During the traditional Fucacoste festival is eaten the typical dessert called musc' tagl ', made of cooked wheat, pomegranate, chopped walnuts - all mixed with vincotto (a sweetener made with figs). It is also called the wheat of the dead: the custom of eating wheat on the day of the dead comes from the Greek Christian rite of eating the blessed boiled wheat. The other ingredients are also symbolic: the pomegranate indicated the rebirth for the Phoenicians, the nuts were called the acorns of Jupiter.

Typical of Orsara is the goat cacioricotta, one of the traditional Apulian products; a fresh and tender cheese suitable for a thousand uses that can be eaten simply accompanied by honey or jams.

The symbol of the cuisine of Orsara is the cook-farmer Peppe Zullo. After emigrating to America as a young man, he decided to return to his native land to enhance his territory.

Among the many initiatives of the histrionic chef, the most interesting is the one of recovering the ancient tradition of the grano arso. As was customary in the wheat fields, after the harvest, the stubble was burned and in the past, the poorest people went to collect the burnt wheat that had remained in the field to make flour.

The flavors of the hard peasant life have been brought back, renewed, to the table by Peppe Zullo through bread and pastas made by grinding toasted wheat, with its characteristic slightly smoky flavor.

In Orsara di Puglia there are several accommodation facilities.

Starting point reachable by car (the road stops 1,5 km below).

The nearest place reachable by car is Castelluccio Valmaggiore.

The nearest locality reachable by bus is Castelluccio Valmaggiore, starting from the city of Foggia with a change in Lucera. 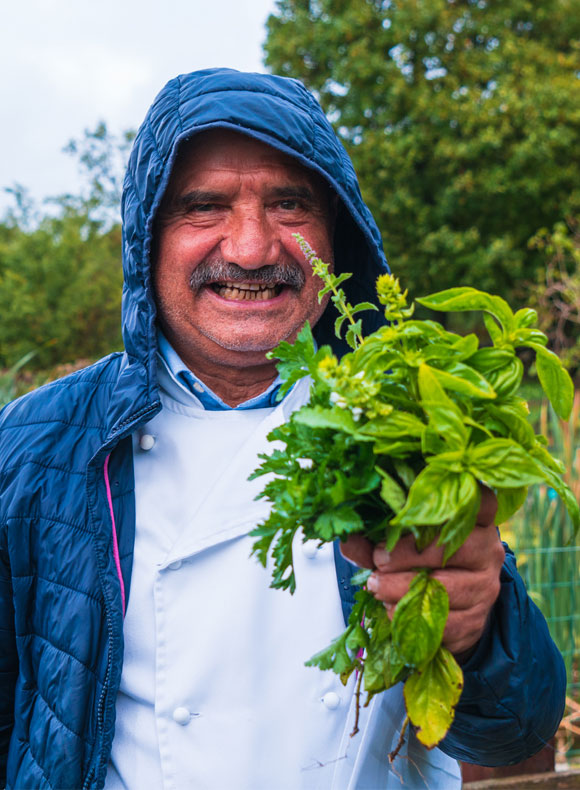 “The weather is unforgiving but chef Peppe Zullo keeps us warm, with his magical smile and his unforgettable recipes” 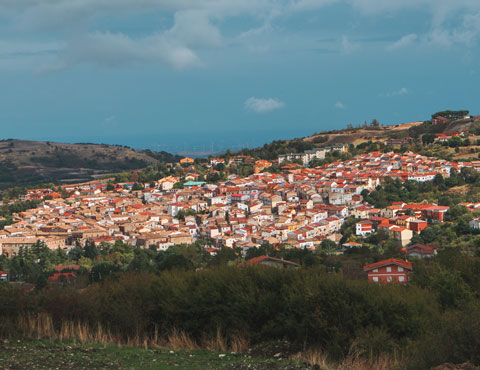