Medium-length stage, with a moderate positive difference in height (that increases in case of a climb to Piz Duleda, highly recommended) and a long, gentle final descent.

The highlights of the day are the panorama from Piz Duleda (2,909 m) and the wonderful Odle group. In the evening we enjoy the sunset that paints with pink the enormous mass of Sassolungo ( 3,181m).

The stage is a variant of the Sentiero Italia (that descends directly from Puez to Selva di Val Gardena). This stage was chosen for the beauty of the Odle group and the panorama offered by the Rifugio Juac.

The climb to Piz Duleda is easy and rewarding. The last section near the top is exposed and requires caution.

We leave Rifugio Puez and proceed westwards, on a comfortable cross path. We then take the track on the right side to climb towards Furcela Nives (approx. 300 m height difference). Once at the pass (if we still have the energy) we leave the backpacks and, on a good track, we head with light shoulders towards the Piz Duleda (2,909 m, approximately 200 m height difference): an incomparable balcony with a view on the sharp peaks of the Odle.

Returning to the pass, we gradually lose altitude while we continue on the wide ridge (approximately 200 m drop) towards the Forcella de Sieles. In the last stretch, walking among stone gendarmes, we find a short but very easy and equipped part. From the pass, we descend into the underlying valley(about 350 m drop). We keep to the right side with a short ascent (about 100 m height difference) and find ourselves in the meadows at the foot of the Odle group.

We walk westward in gentle ups and downs, passing by Malga di Pieralongia (located at the foot of two curious diverging rock spurs that look like a horse saddle). Afterward, with a last easy climb (approx. 200 m height difference), we reach the hilly summit of Seceda (2,518 m), a spectacular observation point on the Odle - one of the most famous of all the Dolomites.

Finally, we face the last and easy descent, all on comfortable paths in the meadows, to Rifugio Juac (approximately 500 m height difference), located in an incomparable position: in front of us stands out the stone castle of the Sella and, next to it, the massif of the Sassolungo - Sasso Piatto.

The famous mountaineer Reinhold Messner grew up in Funes, at the foot of the Odle - on the northern side. Hero of free climbing (as opposed to the artificial progression that was popular in the 1960s and 1970s), in 1968 he was the first to free climb a VIII degree route.

He imposed himself on the alpine scene as a skilled rock climber, his name is however inextricably linked to the Himalayas: between 1971 (the year he climbed Nanga Parbat when during the descent he lost his brother Günther) and 1986, he was the first man to climb all fourteen 8000ers of the planet, in alpine style - it means, without using oxygen, carriers and fixed ropes. His most famous accomplishment was the solo ascent of Everest (8,848 m, the highest peak in the world), without oxygen cylinders. An undertaking considered to be on the verge of madness.

Great communicator, always able to make people talk about him, Messner (like Bonatti before him) was not only a mountaineer but also an extreme explorer: in 1989 he crossed Antarctica on skis and sails pushed by the wind. He later served in the Green Party. Today he dedicates himself to agriculture and to the management of the Messner Mountain Museum, a museum complex (located in several locations in South Tyrol) dedicated to all aspects of the mountain.

In his career, Messner has made over one hundred expeditions and 3,500 climbs.

Val Gardena is one of the most renowned areas in all the Dolomites and it is a destination for summer and winter tourism: it was one of the locations of the Ski World Cup in 2019 - its insidious Saslong slope has been famous since the 1970s.

The valley, of Ladin culture and language, is very famous for wood carving (in particular that of Swiss stone pine). If once the activity was little more than a pastime for those who lived in the mountains, already in the 17th-century wooden sculpture became an important source of income for the area. In particular, local artisans specialized in sacred representations. Today, with the advent of tourism, craftsmanship continues the ancient tradition.

In 1892 in this valley, the actor and director Luis Trenker was born. He achieved worldwide success directing the western "The Emperor of California". The son of a family of artists (painters and sculptors), he began his acting career almost by chance, helping a movie crew as a mountain guide: the protagonist of the film did not know how to climb and so they asked Trenker to replace him.

The Unika Sculpture Fair (which has been taking place for 26 years) is an opportunity to be amazed by the artifacts of the artists of Val Gardena. The ancient tradition of wood carving finds a way to continue the dialogue with contemporary art. For more info, program and tickets, see the following LINK.

Inside the chiesa di Sant’Ulrico e dell’Epifania del Signore, in Ortisei, it is possible to admire numerous wooden sculptures made by Val Gardena artists.

The Crafons de pavé are the typical dessert of Val Gardena. Very similar to the famous Austrian krapfen, they differ in the filling which includes poppy seeds, in addition to honey and cinnamon.

The most important event connected to the Speck Alto Adige IGP is the "Speckfest Alto Adige": a traditional festival that takes place every year in autumn, in Santa Maddalena in Val di Funes, at the foot of Odle.

Departure point NOT reachable by car.

The closest location reachable by car is Colfosco.

The closest location reachable by bus is Colfosco, from the city of Bolzano with a change in Calalzo and Selva di Val Gardena. 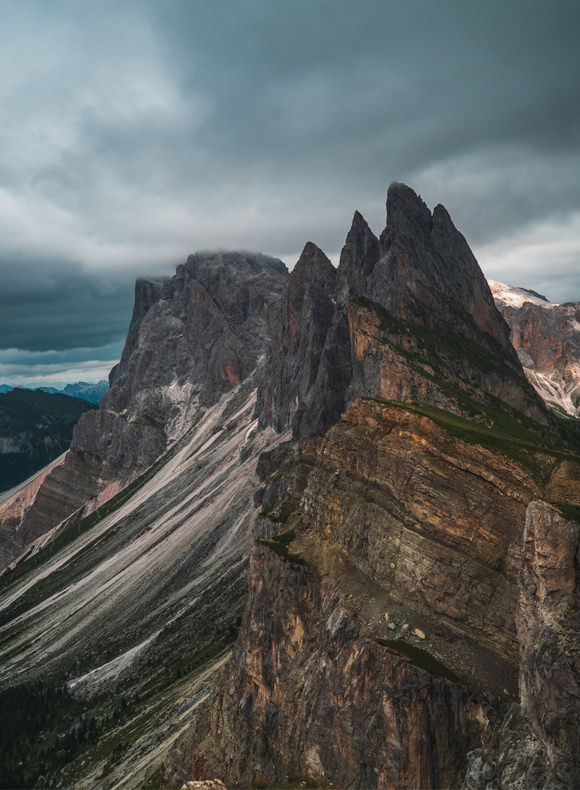 “From Pic Seceda we admire the severe outline of the Odle: one of the most photographed views of the Dolomites” 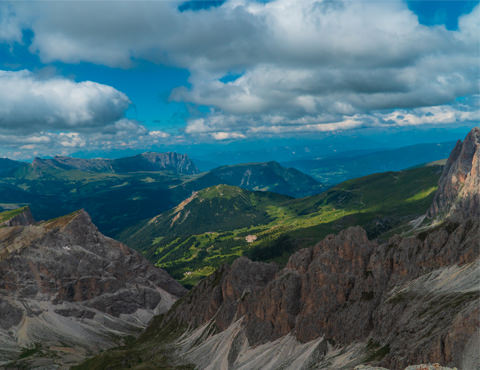