A long and demanding stage, with important differences in height, but without significant difficulties.

Very varied and full of exciting moments, from the sight of the campanarielli to the Grotta delleCiaole, the stage culminates with the beautiful Norman castle of Civita Superiore.

The stage is part of the southeastern connection of the Sentiero Italia, which leads to Apulia. If you want to continue south on the main route, you reach Campitello Matese and from there follow the indications on stage sheet 241 (the first stage in the Campania region).

The signage is often absent and the tracks are not always visible on the ground: keep an eye on the GPS track.

A long part of the stage is on ridges that are very exposed to the wind: be careful.

The path between Civita Superiore and Bojano is in poor condition.

We leave Roccamandolfi on a flat road, then we begin the climb towards Serra Soda (approximately 700 m height difference) walking in the woods on a good path; out of the woods, we pass on a carriage road that we take to the right (and not to the left: the path on that side is nonexistent). After a couple of km, we take the road that soon becomes a path, back into the woods. We enter the beautiful Valle Fondacone: first we pass the dry bed of a stream, then the ruins of an old mountain lodge. Afterward, we start the ramp towards Serra Soda, with a steep but regular slope (the trace on the ground is not always evident).

From the clearing of Serra Soda (1,562 m), out of the wood, we turn west to admire the campanarielli (limestone bell towers of glacial origin). Retraced our steps, we continue uphill (approx. 200 m height difference) along the hillside - the stretch is very suggestive. We begin to descend (approximately 300 m drop) along the northern side of Monte Miletto; the first section is a little technical (due to its steepness and gravelly ground). Shortly after we arrive at the fascinating Grotta delle Ciaole, very narrow and high; from there we continue in a chestnut wood until we reach the great ski resort of Campitello Matese.

After crossing the complexes by road, we return to the path and start to climb again (approximately 200 m height difference) in the chestnut grove; once arrived in Serra le Tre Finestre (1,694 m), we continue out of the woods along a stretch of flat ridge, and then begin the long and regular descent towards Bojano (approximately 700 m drop). Back in the beech forest, we pass Monte Acerone and the hermitage of Sant'Egidio, which deserves a break (the most tired ones can break the stage here, taking advantage of the spartan open bivouac). Passed the hermitage, we descend a little more on a path that is not always clearly visible, where it is necessary to guess the direction; then, with a short climb (be careful to the deep holes in the ground), we reach a carriage road that we take to the left and continue for a couple of km on a slight slope. We return to the path and descend towards the Norman castle of Civita Superiore (beautiful is the view over the underlying valley); shortly after we enter the small and charming village.

Finally, passing the gates that delimit a viewpoint, we start the descent to Bojano; a slightly dirty path leads us to a road that we take to the left, arriving shortly at the town.

Like other cities in Molise, Bojano was a very important Samnite city - perhaps even the most important (the historical-archaeological diatribes are still alive).

Once they reached adulthood, the entire generation born in the sacred spring was removed from their territory of origin to seek a new land to settle in, under the guidance of a shaman who interpreted the "signs" of the sacred animal that was assigned to each of them. The ritual, of a devotional nature, also had a strong sociological component: it allowed the control of population growth and with it, the conservation of culture and customs. To guide the Ver Sacrum of the future Samnites (Roman name of the population: they called each other Safini, therefore Sabini) was the ox who, according to some, stopped at the sources of the Biferno to quench his thirst; in that place, was founded the first Samnite city, Bovaianum.

In addition to the Samnite primacy, Bojano was also the first city of Molise. During the Norman conquest of Southern Italy, it was conquered by Rodolfo de Moulins, a nobleman from Normandy who Italianized his name in De Molise and became a feudal lord of the County of Molise.

Starting from Bojano, whose cathedral was built by the Norman nobleman, the county expanded to the current regional borders.

Another ancient story concerning Bojano is that of Alcek, leader of the Bulgarian horde who fled from the Greater Bulgaria during the 7th century to come and live in these war-torn areas.

The Lombard king Grimoaldo granted to the Bulgarian horde the mountains of Matese and the lower Cilento, where the town of Celle di Bulgheria is still located today.

On the eastern side of the Matese, you can admire the glacial cirques of Aquila, a natural spectacle of rare beauty. These are natural amphitheaters formed by the presence of three glaciers; above all stands out the campanariello, so called because of the two karst spires that overlook it, shaped like a bell.

Above the center of Bojano is the terrace of Civita Superiore: the fortress was put on top the Samnite fortifications, destroyed by Frederick II and then rebuilt by the Aragonese around the village of Norman origin.

With its quadrangular layout, the village was once surrounded by fortified Angevin walls, of which only a few sections have survived, with a cylindrical turret. There are also the suggestive ruins of the castle which, in disuse since 1805, retains a fairytale charm with its beautiful panorama.

Going up from Bojano towards Matese, you will find the hermitage of Sant'Egidio, now inhabited by a nun from Bergamo. Built around the 11th century, it enjoys a beautiful panorama and offers a room as a refuge for the night.

Legend has it that Sant'Egidio lived here for some time, feeding on the milk of a doe. Traditionally, in the clearing next to the hermitage, on the night between August 31 and September 1, the children of the village come here celebrating and recalling the legend according to which Sant'Egidio escaped from the clutches of the devil, who wanted to lead him to hell (on a stone it seems to be imprinted the gigantic hand of Satan).

Eating is not just a matter of nutrition or taste, eating also means entering into relationships with others.

Along the streets of Bojano and in the local markets it is possible to buy vegetables from the Griot Farm. The Griots are the shaman storytellers of West Africa and the farm tells, through its products, the stories of hundreds and hundreds of immigrant children who have come to Italy to find a new future. Working the land and above all selling products to Bojan citizens helps asylum seekers to enter the dynamics of the city: thanks to the Griot Farm, food becomes a method of social inclusion. 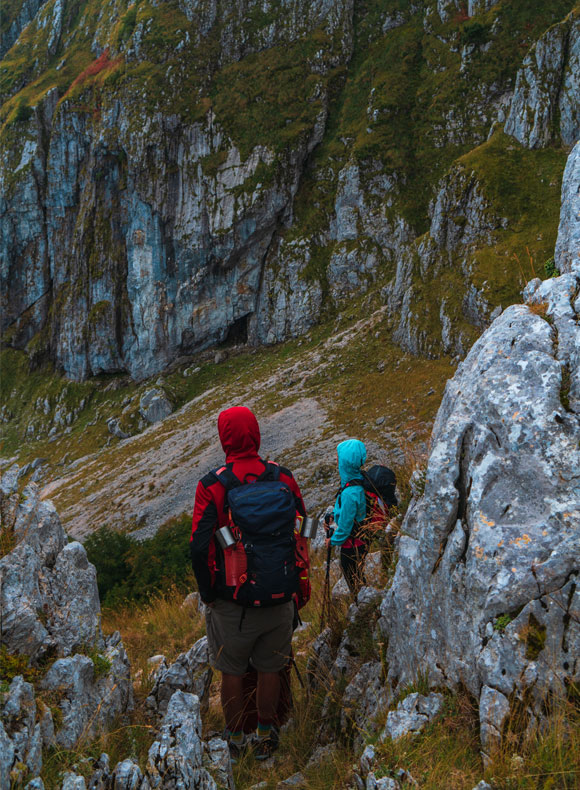 “The campanarielli are a show of the nature - real rock cathedrals” 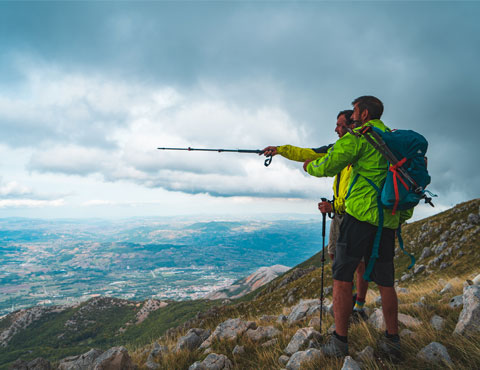